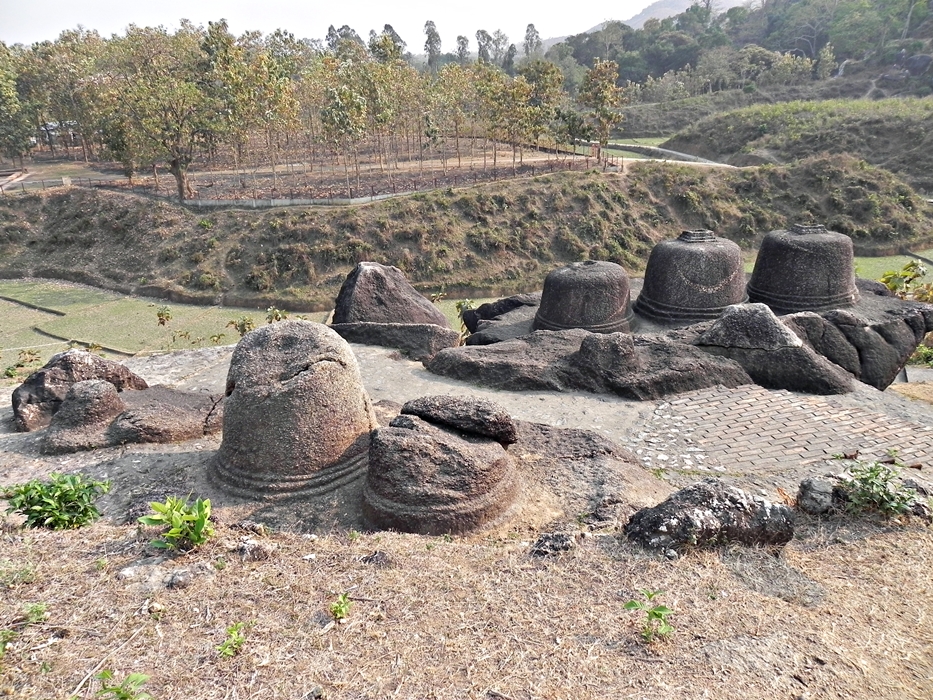 Sri Surya Pahar is located about 12 km southeast of Goalpara town in Assam. Bongaigaon is the nearest city to Sri Surya Pahar and it is about 132 km northwest of Guwahati, the capital city of Assam. Sri Surya Pahar is a significant but relatively unknown archaeological site in Assam, India. The site consists of a hilly terrain where several rock-cut  Shiva Lingas, votive stupas and the deities of Hindu, Buddhist and Jain pantheons are scattered all over in an area of about 1 km. The site of Sri Surya Pahar is centered on the hills (Pahar) of Sri Surya which is profusely filled up with Shiva Lingas (Lingam). According to legend and popular belief, it is said that 99999 Shiva Lingas were engraved on this site by Vyasa in order to build  a second Kashi (where there were 1,00000 Shiva Lingas) and that once upon a time, it was one of the holiest pilgrimage sites one could visit in the region. The name of 'Sri Surya Pahar' implies that the site was perhaps associated with the cult of sun (Surya) worship. Some archaeologists believe that a carved stone slab which is now housed in the Sri Surya Temple and worshipped as ‘Surya’, may be a part that was detached from ceiling of the temple of Surya.
Apart from the numerous stone carvings of Shiva Lingas and the 'Prajapati' slab, there are many rock carvings of Hindu deities, which can be seen at the foothills of Sri Surya Pahar and the areas adjacent to it. Notable among them are the sculptural panels of Lord Shiva and Lord Vishnu. One of the most prominent sculptures is the twelve-armed Lord Vishnu with a seven-hooded canopy over his head. It is worshipped as Dasabhuja Durga. Adorned with a necklace, kundalas, armlets, garlands, etc. the deity stands erect on a lotus.
In the Northeast region of India, Jainism could not get a remarkable footing throughout its long history. Except for the solitary example existing inside the natural caves at Sri Surya Pahar in Assam, hardly any other Jain remains have been found in the region so far.