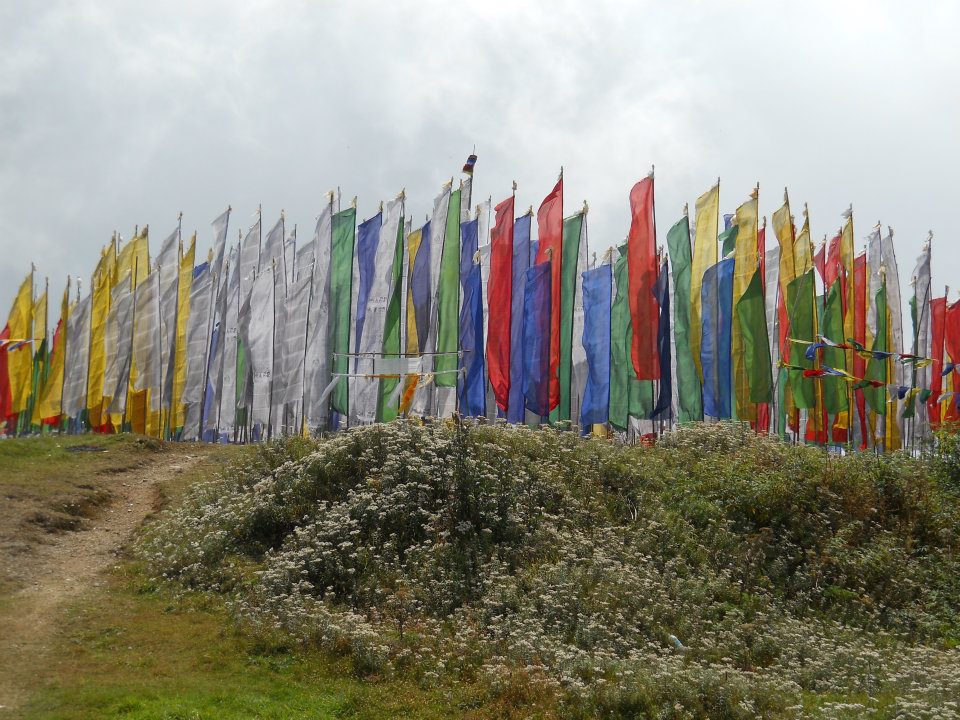 
Something that often doesn't go unnoticed by the visitors and travellers are the flying colored flags attached to a sting. They have their own story and carry tremendous significance in Buddhism.

These are called prayer flags, which the Buddhist families hoist on several occasions for the purpose of peace, compassion, prosperity, strength, wisdom, and overall well-being of all the people of Sikkim.

There are two types of prayer flags: one is horizontal and is known in Tibeten as lung-ta (meaning wind horse) and the other one is vertical and is known as Darchog.

Lung-ta comes in small pieces that are either square or rectangular in shape. They are attached to a long thread and then hung between two rigid objects, diagonally or horizontally. They are usually connected between the tops of the temples (monasteries), or between two tall trees in the mountains and are also tied along the bridges. On the other hand, Darchog is a single, long rectangular piece attached to a long pole and erected vertically on the ground. They are put around houses, on the roof tops, in monasteries, and religious places.

Originated in the times of Gautama Buddha, these prayer flags hoisted in a specific order from left to right come in five colors, namely blue, white, red, green, and yellow. Each of the colors represents one of the five physical elements These five colors are known as pancha varna in Sanskrit, meaning five colors.

The color blue represents the sky and the space, white represents air and wind, red represents fire, and the green and yellow represent water and earth, respectively. One can also hoist these flags according to one's physical element.

It is believed that when the wind blows the prayer written on the flags, it is almost same as reciting them. This is the very reason why are they always put up high in the air!.

It is not an easy task to hoist prayer flags. Also, it is not merely about attaching them to a string and hoisting them; it takes place as a proper ceremony.

First of all, it has to be consecrated or blessed and sanctioned by a lama (monk) so as to enhance its significance and influence.

According to Tibetan astrological calculations, prayer flags are not supposed to be hoisted on some days called "baden" in a luner month, as it is believed that whenever Baden occurs, it brings bad luck and misfortune. Baden is clearly marked on the Sikkim government almanac.

Not only for the purpose of overall well-being, prayer flags are also hoisted on important occasions such as losing, losar (new year celebration), marriages, and official functions. They are also put up on the event of illness, journeys, speedy recovery, important undertakings to ensure a safe journey, and avert obstacles and accomplish specific task.

Prayers written on these flags are spiritual and godly. Therefore, it should be treated with respect and disposed properly by burning them.

So dear readers, sometimes the smallest things in life take up the most room in your heart and the next thing I now know is, some of you will definitely stand on this beautiful land someday and smile over those flying colors!