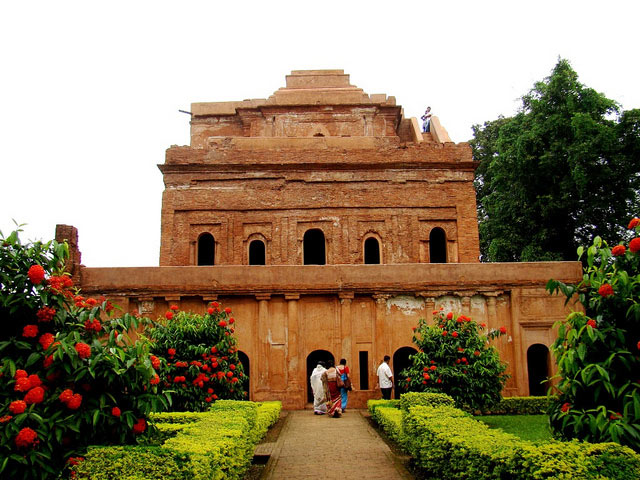 Kareng Ghar  or "royal palace" which is also commonly known as the Garhgaon Palace, is located in the town of Garhgaon which is 15 kilometres (or 9.3 miles) from Sivasagar, in Upper Assam, India. Out of all the places that contain Ahom ruins in Assam, the Kareng Ghar is one of the grandest examples out of all of the places related to Assam’s Ahom architecture and is a hub for tourists today. The palace structure was mostly built of wood and stone. In 1751, a brick wall was constructed by Sunenphaa, who was the son of Sukhrungphaa, a Tungkhungia king of the Ahom kingdom in Assam under whom the kingdom reached its zenith of power and glory. This brick wall was about 5 kilometres (or 3.1 miles) in length that surrounded the Garhgaon Palace and the masonry gate leading to it which has led to Kareng Ghar becoming a prime tourist hotspot in Assam.

After the destruction of the old palace or Kareng Ghar, it was rebuilt in the same place in Assam by Suremphaa (reign: 1751-1769) around the year 1752 as it stands today as a seven-storied structure.  The three floors underground are referred to as the Talatal Ghar of Assam and the rest of the floors are called the Kareng Ghar of Assam The Talatal Ghar is also worth visiting as a tourist as one might discover unique places and two secret tunnels . After Sukhrungphaa's death, the Kareng Ghar went through many architectural alterations to its structure, which resulted in its irregular shape that a tourist remembers it by or as we see it today. The plan of Kareng Ghar can be easily navigated by a tourist as it follows a pattern; from east to west, several rooms run along a long corridor while from the north to the south are the places that house the smaller wings. The places on the ground floor served as stables, storerooms, and servants' quarters. The Kareng Ghar was built mainly of wood, which was largely destroyed over time. The places housing the royal apartments were on the upper storey, of which only a few rooms now remain. As a tourist one will find close to it an octagonal room on the northern wing which once served as the Puja Ghar (prayer house). There are stairs leading up to the terrace. An isolated room stands on the south, which is believed to have been used by the queen during her confinement – a major tourist attraction.