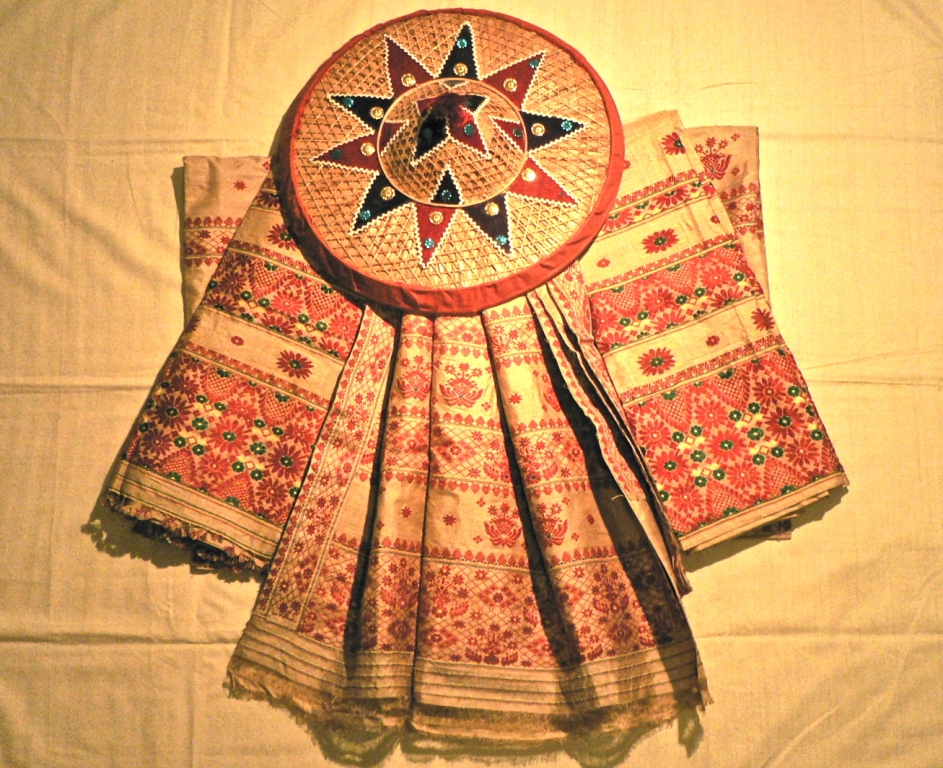 The famous Mekhla Chadar of Assam

The traditional attire of the people of Assam is Dhoti-Kurta for men and Mekhla Chadar for women. Mekhla Chadar or the traditional attire/Assamese sari is an ensemble of two or three pieces. One of them is worn as the petticoat and the other as the 'anchal' or sari. Mekhla Chadar is the indigenous traditional attire of the people of Assam. Two main pieces of cloth are draped around the body. The bottom portion, called the mekhla is draped from the waist downwards. It is actually a form of a sarong, which is a very wide cylinder of cloth that is folded into one or two pleats in order to fit around the waist and then aptly tucked in. The folds are to the right and are quite less in comparison to the pleats in the Nivi style of the saree, which are folded to the left and have multiple pleats. No strings are used to tie the mekhla around the waist, although an underskirt with a string is often used. The top portion of the two-piece dress is called the chadar and it is a long length of cloth that has one end tucked into the upper portion of the mekhla and the rest is draped over and around the body. A fitted blouse is often worn in today’s age. However, in the past and traditionally another garment called a riha was and is still worn instead of a fitted blouse. Ornamental designs on the mekhla chadars are traditionally woven and never printed. Sometimes a woven pattern, called the pari, is stitched along the sides of a chador, or along the bottom of a mekhla. The mekhla chadar is available in many stores across Guwahati and other cities of Assam. Babymoon Before Or After Childbirth Babymoon: Memories in the Making Celebrate Parenthood By Going On A Babymoon The Babymoon: Making It Great
ALL BLOGS