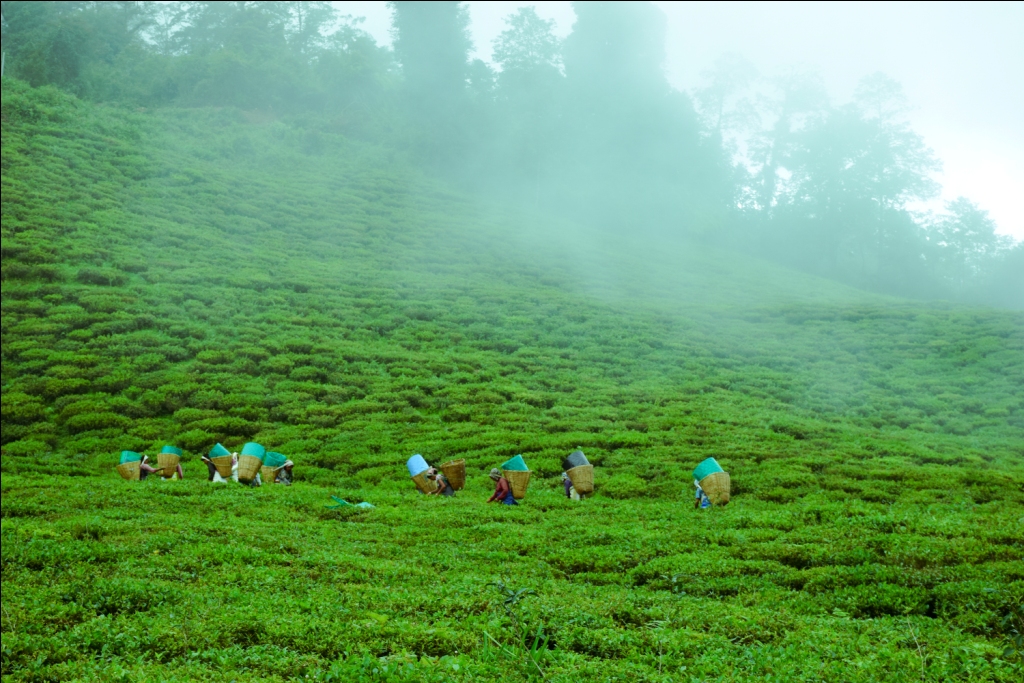 The Champagne of Teas


Darjeeling tea is known to be the purest and most distinctive tea worldwide. The UK Tea Council refers to Darjeeling Tea as the Champagne of Teas due to its exquisite taste, which almost resembles muscat (Moscato) wine.

Climatically, tea belongs to the monsoon lands where high temperatures, long growing season, and heavy rainfall help the growth of tea plants. A temperature of 21°C during the growing season of not less than 8 months is ideal. Warm summers and frequent rains promote rapid leaf reproduction and increase the number of annual pickings. Tea shrubs grow better when shielded from strong sunlight or violent winds. It is therefore usual in plantations to plant some large trees in between the shrubs to give shade not only to the tea plants but also to the pickers.

Tea grows well on high land with well drained soils having a good depth, acidic pH in the range 4.5 to 5.5, and more than 2% organic matter. Shallow and compacted sub-soils limit root growth. Tea plants growing on such soils are liable to suffer from drought during dry period and water logging during the rainy months. The depth of the ground water table should not be less than 90 cm for good growth of tea. Catchment planning is required for improved soil and water management practices in a tea estate, for which a land survey designed to identify all major and minor topographical features needs to be carried out.

How Tea is made?

The plucking rule for Darjeeling tea is “Two Leaves and a Bud”—only two fresh leaves and a tender bud are hand-plucked. After plucking, the tea is processed the orthodox way: withering, rolling, fermenting, drying, and sorting.

Withering: The leaves are put on so called withering tables: long tables with fine mesh as a table board that is being aired with a ventilation system from underneath. Fresh leaves contain about 73% to 80% of moisture; after 10 to 20 hours of withering, the leaves’ moisture content goes down to about 60% to 65%. For a good quality tea, it is of utmost importance that the withering is done evenly.

Rolling: After withering, the soft tea leaves are put into rolling machines—two large round metal plates run in different directions and gently twist the leaves, thus opening the cell walls of the leaf and allowing the juices inside to get exposed to the oxygen in the air—the start of the oxidation process or fermentation.

It takes a lot of expertise to decide upon the right amount of pressure and the right duration of the rolling process (usually about 20-60 minutes) to bring out the best results.

Fermenting: The oxidation process that has been started during withering and rolling reaches its climax during the fermenting process, which lasts around 2 to 5 hours. During this time, black tea will develop its characteristic flavour and aroma, while losing of its astringent and bitter taste.

Drying: Drying of firing or tea leaves is a tricky step in the manufacturing of tea. A mistake at this step could ruin a whole day‘s production. On flat conveyor belts the tea runs through a giant oven and is exposed to hot air, around 95°C. The heat dries the tea leaves, giving them the dark colour, and stops the fermentation process. Moisture content is reduced to about 3 to 4 percent, which ensures that the tea can be stored for a long time. The drying process takes about 20 to 25 minutes.

There are different flushes of this tea, dependent on season, each bearing a unique taste.

·     First flush is harvested in mid-March following spring rains and has a gentle, very light colour, aroma, and mild astringency. In between is harvested between the two "flush" periods.

·         Monsoon or rains tea is harvested in the monsoon (or rainy season) between second flush and autumnal, is less withered, consequently more oxidized, and usually sold at lower prices. It is rarely exported and often used in masala chai.

·         Autumnal flush is harvested in the autumn after the rainy season and has a somewhat less delicate flavour and less spicy tones but fuller body and darker colour.