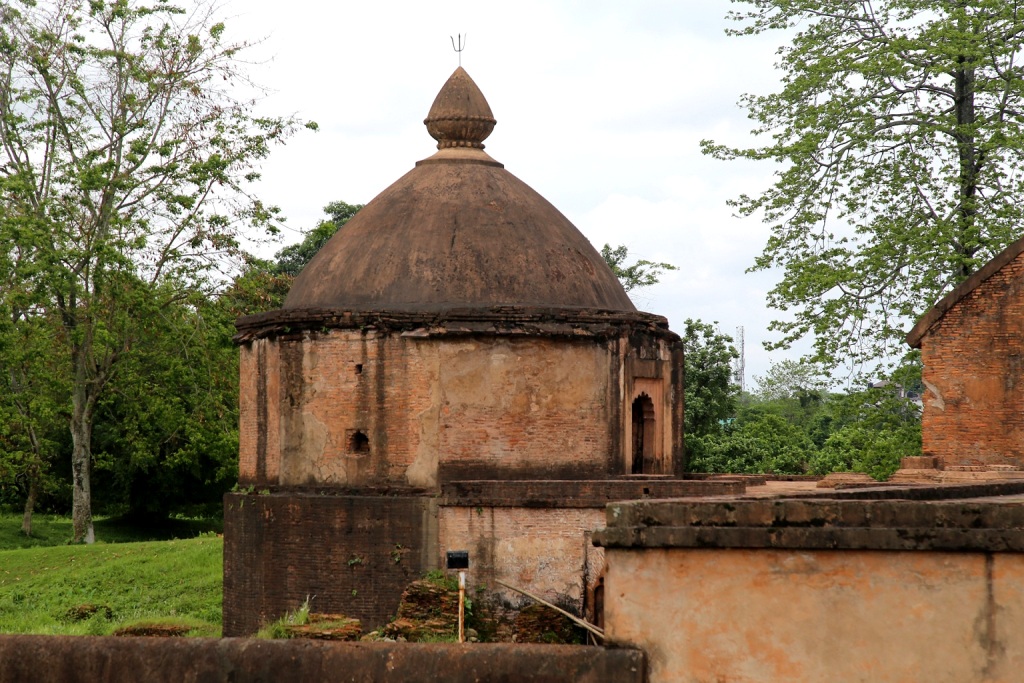 URL copied.
Cancel
Just 3 kms from Sibsagar town, Assam is Talatal Ghar, one of the finest examples of Assamese Ahom architecture. The Talatal Ghar place is also the largest of all Tai Ahom monuments in Assam to visit.
Visitors nowadays are only allowed to visit the ground floor, the first floor, and what remains of the 2nd and 3rd floors of the Talatal Ghar, Assam. In Talatal Ghar, the floors below the ground have been sealed, as visitors tended to get lost within its mazy structure and were never seen.
The Talatal Ghar in Assam is a place which was initially built as an army base. It has two secret tunnels, and three floors below ground level which were used as escape routes during the Ahom wars. The Rangpur Palace is a seven-storied structure (1751-1769 CE) to visit.
Talatal Ghar in Assam is made of brick and an indigenous type of cement (a mixture of Bora Chaul - a sticky variety of rice grain - eggs of swan, etc.). The Talatal Ghar place had two secret tunnels. It is about  3 kilometres in length, which connects the Talatal Ghar to the Dikhow River, while the other,  16 kilometres long, leads to the Garhgaon Palace, that was used as an escape route in case of an enemy attack.
While visiting, you can find from east to west, several rooms run along a long corridor; and from north to south are numerous smaller wings. The ground floor were used as animal stables, store rooms, and servants' quarters. The Kareng Ghar place was built mainly of wood. This Assamese place was largely destroyed over time. The Royal apartments were on the upper floors, out of which only a few rooms now remain, close to an octagonal room on the northern wing which once served as the Puja Ghar (prayer house). In this Assamese place, an isolated room stands on the south which is believed to have been used by the queen during her confinement.
The first Ground Penetrating Survey (GPR) in the northeast, undertaken at two Ahom monuments in Sivasagar district, Asaam in early Apr 2015, has not revealed the existence of any secret tunnel place. The survey was carried out by IIT-Kanpur, in collaboration with the Guwahati circle of the Archaeological Survey of India (ASI), over a period of five days at Talatal Ghar and Ahom Royal Palace (Kareng Ghar), both in Sivasagar district, Assam.
Nowadays visitors can only view the ground floor, the first floor, and what remains of the 2nd and 3rd floors .The floors of the Talatal Ghar in Assam below ground have been sealed off, and most of the wooden parts of the palace have disappeared over time.