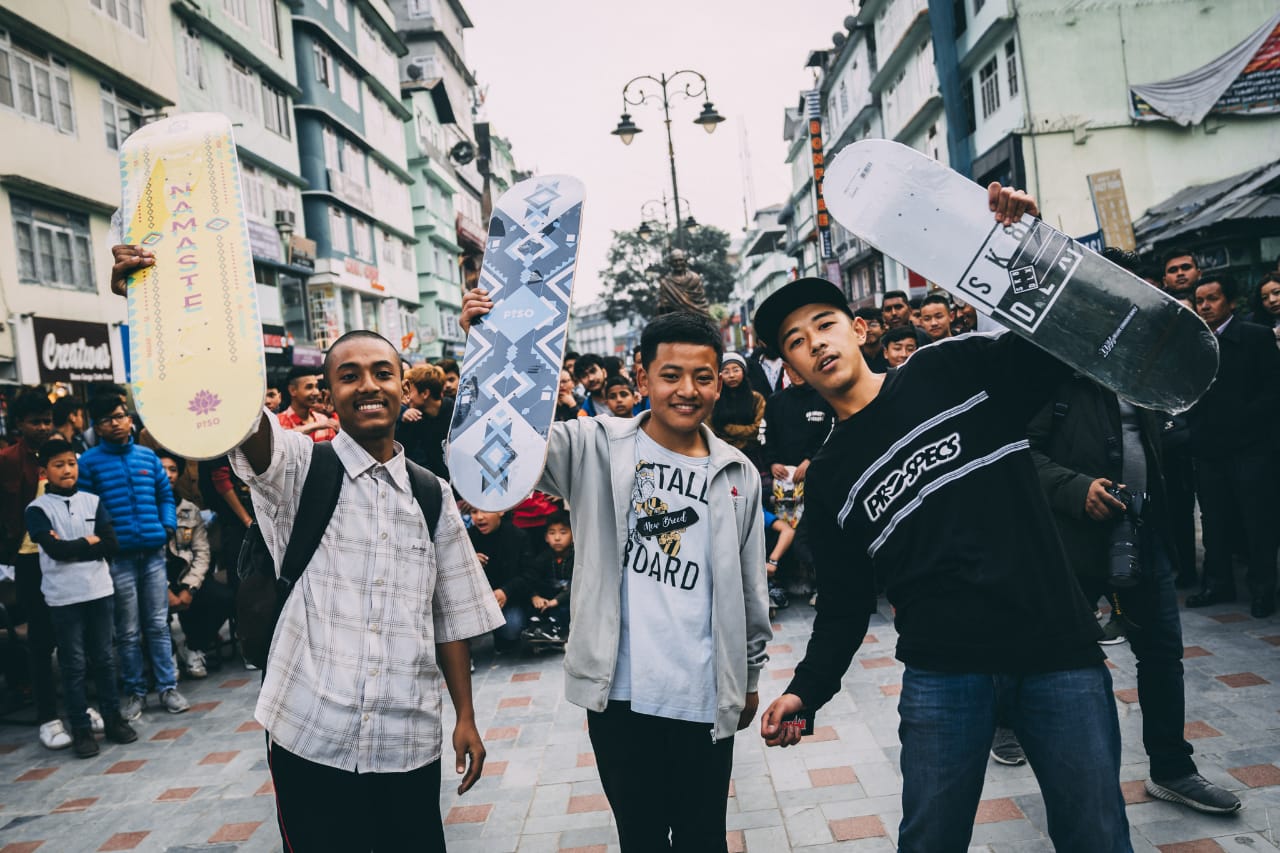 Meet Tenzing Tsundu Bhutia who goes by @jack_juniors_world, President of @skate_konnect. Tenzing’s passion for skateboarding was flaring at a time when skateboarding was non-existent in Gangtok, but fighting through every hurdle, he succeeded in bringing it to the forefront as a community-based sport. In the following excerpts is the inspirational story behind it all.

“Skate Konnect was formed in 2016 with one skateboard and 5 skaters- Anish, Lobzang, Namgyal, Johanan, and I. We decided to skate together at one chosen location so that people knew where to find us and we could over time spread skateboarding as a community-based sport in Gangtok. So, our obvious choice for the spot was the roof top of Kanchenjunga Shopping Complex.

Over time we were able to attract a lot of kids and teenagers to take up skateboarding. We taught them to skate and slowly taught them the technical aspects.

The first two years were very hard for the community to keep up with consistency. There was a time when our one and only skateboard broke. We had to stop for a while until the next one arrived. With other founding members finishing their graduation, some of them left Gangtok and the scene became dry. However, after some months of no skateboarding, a new skateboard arrived which was brought by one of our founding members Lobzang Gyamtso from Bangalore after he completed his internship in Goa.

Skateboarding resumed on the Complex terrace. However, over a span of two months, our skateboard broke again and we had to stop. It was a very depressing moment for me personally. I then took a trip to Nepal along with my bandmates for a concert and a sister of mine had sent money to buy her a skateboard. I came back with 2 skateboards and 1 deck. This time things started to fall into place.

In a months time I met Mohan who was here on his vacation. He works in Hyderabad and is one of the best skaters I know with a lot of passion and dedication for the sport. Skating with him was great fun and together we managed to rejuvenate the scene again. This time the bar was raised and I personally focused more on improving myself as a skateboarder.

One day, I came across a new Skateboard brand of India that was on the verge of launching their website as a company to the people of India. I wrote to them and shared my love of skateboarding and all of the efforts we were making to spread the sport here. After days of communicating, finally PISO skateboards decided to make me the first distributor for their skateboards! This meant the world to me because this would help create a huge opportunity for the Skate Connect community to grow.

The first lot didn’t take much time to get sold out; the second lot, likewise. I am so happy to see skateboarding grow as a sport here. It helps engage kids in directing their energy towards skateboarding and away from drugs.

Now we have a good number of skateboarders, around 30, from Gangtok and Namchi altogether. We aim to spread skateboarding all across Sikkim, and our main goal is to build skate parks across every district in Sikkim.

Now, we have ramps and rails, which we built for the event with sponsored money. This event has motivated all skateboarders and has strengthened the community as a family as well. We are now moving to the next level of skateboarding by using ramps and rails. We hope to work consistently and achieve all of our goals. Hopefully, someday we will produce professional skateboarders from Sikkim in the near future.”