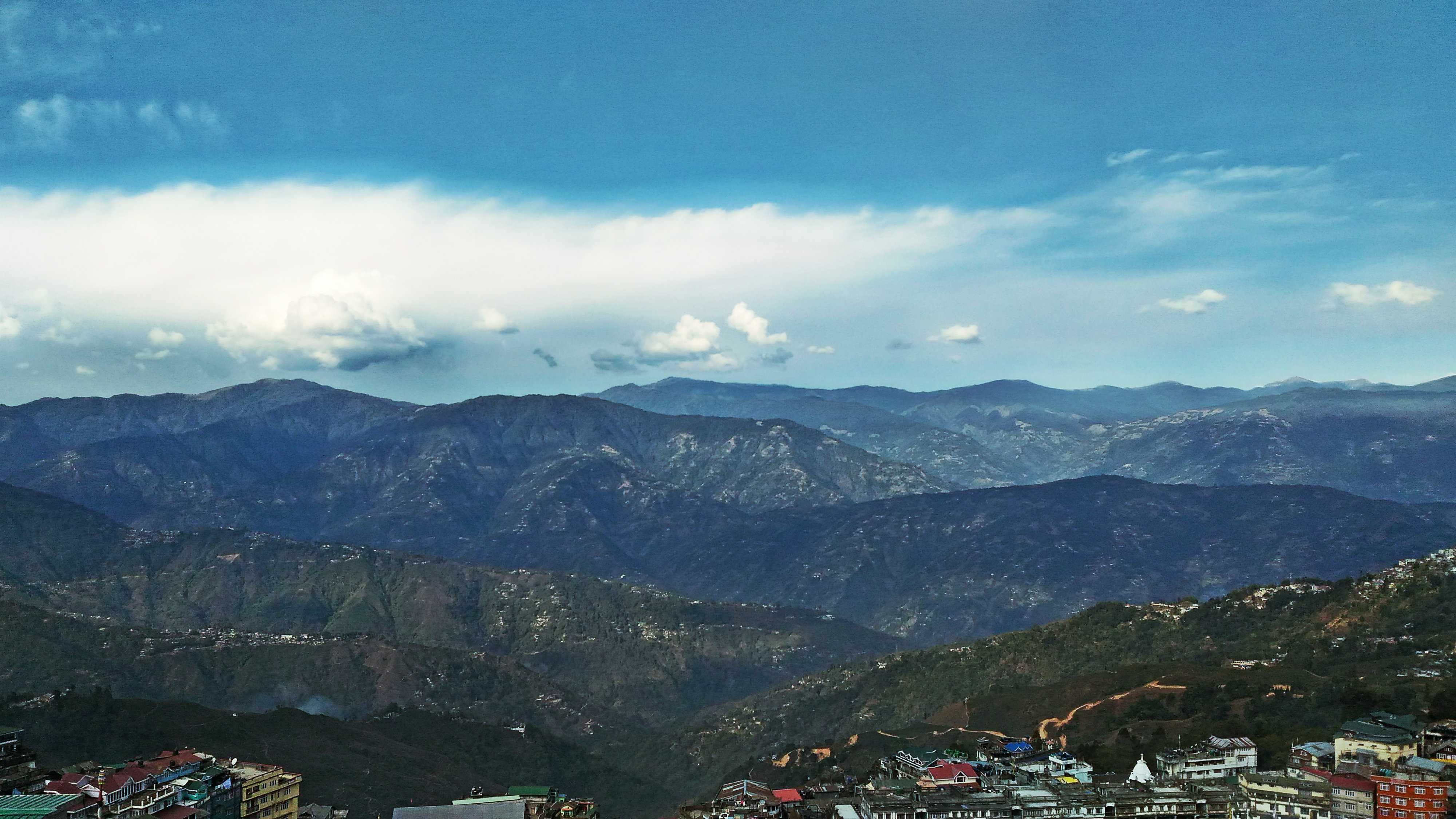 My brother and I visited Darjeeling when we were too young to even remember the details of the trip. Apart from the early 4am ride, the ice-creams at Chowrasta with scoops containing flavours of our choice (we couldn’t choose our own flavours in Gangtok then), and somewhat blurry pictures of St. Andrews Church, I don’t remember much about the trip. But I do remember one thing- I was fascinated with the place and so was my brother. We had wanted to visit Darjeeling again since that day itself [Read: 5 reason to visit Darjeeling].

We got the chance to revisit Darjeeling again after 7 long years when my uncle decided to take us to his wife’s place. We would be staying for 3 days.

We had our lunch at Rangpo, which serves as the border between Sikkim and West Bengal.

The entire journey from Rangpo to Darjeeling was extremely scenic, the views getting better as we neared Darjeeling.

Since we had started early, we reached Darjeeling in the afternoon. We spent the afternoon sitting on one of the benches at Chowrasta and watching the hustle and bustle of people against the peaceful backdrop of floating clouds and beautiful hills. Young people were busy within their groups while the middle-aged could be seen taking a rest on the benches. Local guys were offering horse rides to tourists and shops were busy with their evening crowd. I liked the fact that four-wheelers weren’t allowed in Chowrasta. If you had two-wheelers, you were supposed to get off from your vehicle and walk it through the stretch of road/area that marked Chowrasta. This made Chowrasta much less crowded and an interesting place to sit and enjoy some evening tea [Read: The champagne of teas].

After drinking our tea, we went to the Observatory Hill and watched the entire area from above. The view was interesting. One could stay up there for hours and still not get bored.

We then visited the famous Oxford Book Store, and as I had started watching Game of Thrones just recently, I was drawn to the volumes of “The Song of Ice and Fire” by George R.R Martin.

After our bookstore visit, we were getting ready to explore the food joints and market. Just then, we saw people started gathering in large numbers in front of what was known as ‘Hawa Ghar’ where a program was about to start. We too rushed through and secured our position in the second line.

Local artists sang and danced on the stage, and as we jumped around with the beats, I felt that it was Darjeeling’s way of welcoming us. It was a welcome unlike any other.

Exhausted, we went directly to our uncle’s place and crashed after a fulfilling dinner.

Day 2: Early morning walk to Chowrasta and a visit to the zoo

We started our day with an early morning walk to Chowrasta. Pigeons, lots of them, could be seen all around Chowrasta. Middle-aged people and old jolly uncles could be seen wearing joggers and walking as they talked merrily with their companions. We took a side road and came across parks, beautiful resorts, Loreto College, St. Andrew’s Church, and many other attractive structures.

There are prominent art, music, and animal welfare societies in Darjeeling, which was evident from the banners stuck on the walls.

In the afternoon, we visited the Padmaja Naidu Zoological Garden. Located at an elevation of 7000 ft, it is the highest zoological garden in India. Exploring the zoo was a treat to our eyes, and we enjoyed the view of a wide range of animals like snow leopard, Tibetan wolf, red panda, tiger, and bears, among other rare animals. We also visited the Himalayan Mountaineering Institute located within the zoo premises.

After an eventful day at the zoo we roamed around the nearby places and tried out food joints in Chowrasta market and clicked some pictures outside the exemplary Gorkha Hall.

Day 3: Random hiking around villages and shopping at Chowrasta Market

It was the last day of our trip and we spent it leisurely roaming around the villages nearby our uncle’s place. The trail was extremely scenic and every time we felt a bit tired we would sit down on the trail and watch the mountains in front of us. Some peaceful moments with the mountains, some laughter, and some water would effortlessly enliven us and we would continue our hike forward.

We came across some villages with scarcely distributed houses. The houses were small with cow sheds outside. We didn’t see many villagers as they might have been busy with their daily chores.

After walking for about 3 hours, we had lunch and returned back. We were too tired to go anywhere else so we rested and went shopping at Chowrasta market at the evening.

Chowrasta Market buzzed with local people busily marching in the streets. There were shops from where you could buy souvenirs, gifts, clothing, trekking gears, among others. We went through some shops frantically looking for that one particular shop we had heard so much about.

When we finally found the shop we were looking for, slightly off from the main market, we were elated.

After all, we had never seen something like that in Gangtok- “A complete shop for Music Band’s merchandise.”

We had shops that sold music band’s clothing and accessories in Gangtok but the range of products were vast and higher here. Overjoyed, we bought what we could with the limited amount of pocket money that we had. (This was before online shopping became popular in Gangtok.)

We headed back and rested well for the next day’s journey.

Day 4: Back to Gangtok

We left Darjeeling at noon and throughout the journey I couldn’t help but feel a void in my heart. Darjeeling, in such a short span was able to win an unreplaceable place in my heart.

I’ll visit again, I thought. And why not? After all we still haven’t seen a lot of must-visit places of Darjeeling and haven’t tried activities worth doing there (not even the Toy Train). We travelled more like a local person and less like a tourist. But maybe that’s the reason why we felt so connected to the place and didn’t feel like leaving.

So, we still have a lot of things to get out of Darjeeling. And that surely is a valid reason to visit this magical place again, right?

You may also like to read: Discover a charming hill and its tea garden
Looking for itinerary ideas? Read: Darjeeling Gangtok tour package
Check out this cool tour package: Tour in Darjeeling