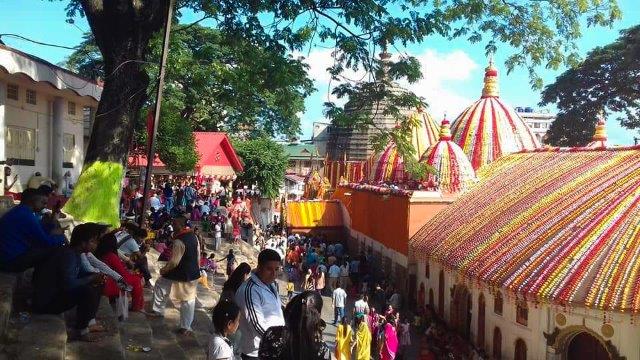 Guwahati is known for its many mandirs (temples); hence, it is also known as the “city of temples.” It is a popular pilgrimage site for thousands of devotees every year. Each mandir differs in structural beauty and history which only makes them fascinating revered religious sites in Guwahati, Assam.

Things to do in Guwahati

Structure and Architecture of Kamakhya Mandir

Rudra Singha (reign 1696 to 1714) was a devout Hindu and as he grew older he actually decided to formally embrace the religion and become an orthodox Hindu by taking sharan of a guru, who would teach him the mantras and become his spiritual guide. But he could not bear the thought of humbling himself in front of a Brahmin who was his subject. So he sent envoys to Bengal and summoned Krishnaram Bhattacharyya, a famous mahant of Shakta sect who lived in Malipota, near Santipur in Nadia district. Legend suggests that the mahant was unwilling to come but consented to be given the care of Kamakhya Mandir, Guwahati. Though the king did not take sharan, he satisfied the mahant by ordering his sons and the Brahmins to accept him as their spiritual guru.

When Rudra Singha died, his eldest son Siba Singha (reign 1714 to 1744) became the king and handed over the management of Kamakhya Mandir, Guwahati along with large areas of land (Debottar land) to Mahant Krishnaram Bhattacharyya. The mahant and his successors came to be known as Parbatiya Gosains, as they resided on top of Nilachal Hill. Many Kamakhya priests of Assam are either disciples or descendants of the Parbatiya Gosains, or of the Nati and Na Gosains.

How to Reach Guwahati

By air: Lokpriya Gopinath Bordoloi International Airport in Guwahati is well connected to all major cities in India.

Book a comfortable stay with TourGenie

Q. What is the best time to visit Kamakhya Mandir?

October to March are the best months to visit Kamakhya Mandir in Guwahati.  To get the best experience, visit the temple during the Ambubachi Mela held in June. However, the temple remains closed for 3 days during the festival.

Q. What are the entry timings of Kamakhya Mandir?

Q. How do we reach Kamakhya Mandir from Guwahati?