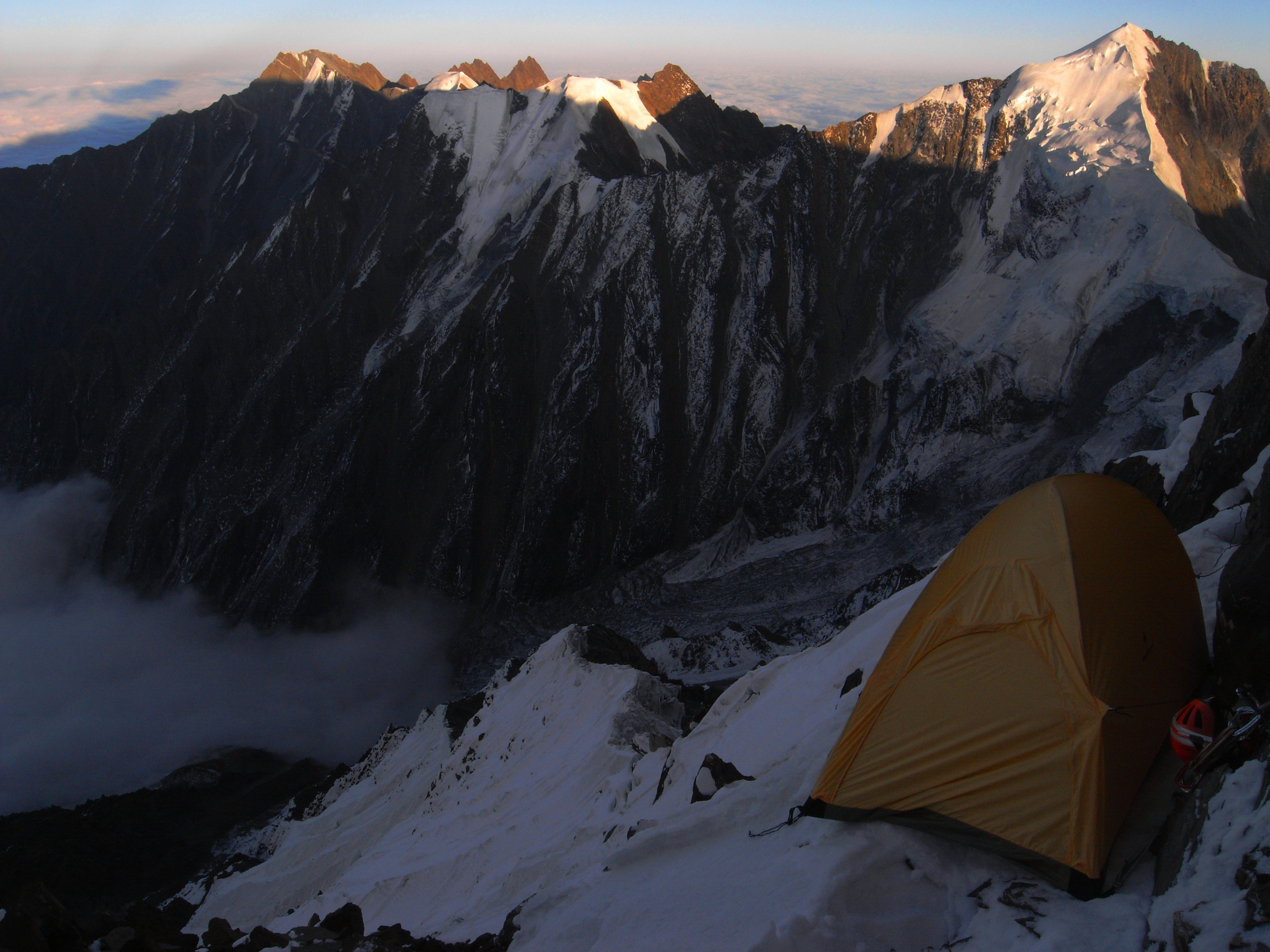 Hazards of Extreme Camping
By J. D. Adams
Seeking direction as a youth, I bought a compass and wandered into the savage heart of the wilderness. Oregon's history came alive as I retraced pioneer trails and skied cross-country to skyline camps. Now, grizzled and trout revering, I offer this to show that extreme camping is so much more than surviving the crux of desolation in wet shoes.
Many campers have succumbed to their own camping equipment. Mummy bags were named for their tendency to shift around on the victim during the night, so you wake up facing an ominously shroud-like interior. Only by struggling absurdly with the sleeping bag can one return to the world of the living. Often during the struggle, everything in the tent containing Velcro will attach itself around the victim, creating a monstrous appearance. The flailing around will eventually roll the tent over, impaling the occupants on camping sundries and covering them with loose oatmeal. The modified mummy bag with a fuller cut is more comfortable and less likely to incite claustrophobic reactions.
Tents can function as rain collection devices, drawing moisture into the seams and through the fabric by a process still a mystery to camping scientists. Condensation and leakage collaborate to float the occupant on an inland sea, or upon rising, the victim is met by gallons of super-cooled water holding in the tent fly such that rebirth and amphibious regression are not unlikely. The stakes are high in the tent game, where experience with a good basic design like the freestanding dome tent will ensure dry and comfortable slumber. Before setting up your tent, inspect the lay of the ground for where water may pool up, and look overhead for precarious snags and branches.
The priming of gas stoves typically produces a fireball that is great for trimming those bushy eyebrows, also giving a hard outdoorsy look to the face. Working the stove is always great fun, a bit like being an astronaut and firing the afterburners. Some people get into character, shouting terms like “throttle up!” and “more power!” as they operate the pump and valves to avoid the dreaded “flameout”! Overcooking is the result, like your mother’s pork chops. Periodic cleaning of the stove hardware is necessary for easy starting.
Backpacks have come a long way from the L-shaped wooden frame and attached rucksack. The principle is still the same, to explore the limits of human endurance like Lewis and Clark on a bad day. The inner frame pack is more streamlined, allowing gazelle-like movement through the wilderness. Skiing and climbing is easier with a pack that is closer to your center of gravity. The exterior frame pack is the most comfortable for normal hiking conditions. Regardless of the type of pack, choose a model with wide, firm padding on the waist and shoulder straps.
Prior to mastering the telemark and snowplow turns, the novice skier will tend to hurtle out of control across the unsuspecting landscape; their approach marked by a cloud of forest debris and the raucous cries of tormented wildlife. Elk and bear stampede fearfully. Cross-country skiing with a full pack combines the grace of drunkenness with the feel of a military exercise. Once mastered, expeditions can be launched into the high country, where an altered state will settle in from oxygen deprivation, and annoying tunes may run through the head. Often giddiness will persist well into the later stages of hypothermia that can only be cured by fishing.