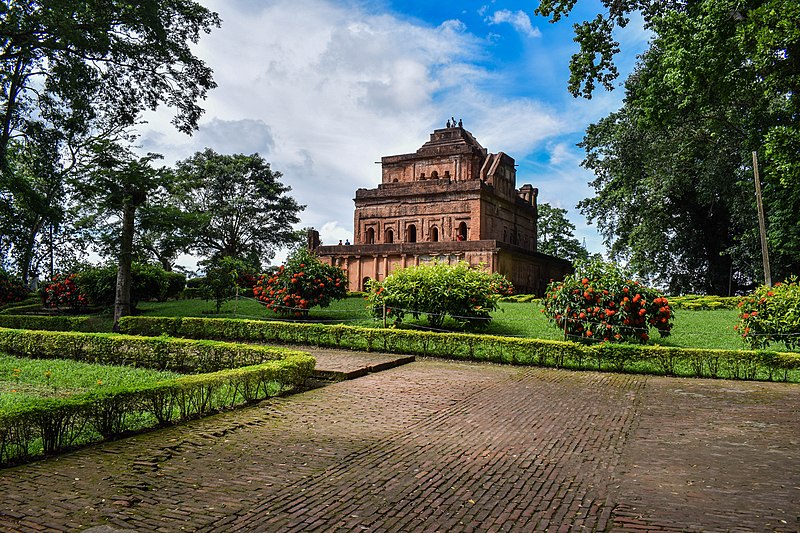 Garhgaon palace, the major attraction of the town of Ahoms, constructed by the XV the King, Suklengmung in 1540, located 13 kilometers east of Sivasagar, Assam.  In 1747 Pramatta Singha, son of Rudra Singha, constructed the brick wall of about 5 km in length surrounding the Garhgaon Palace and the masonry gate leading to it. The old palace was demolished and the current seven storied palace was rebuilt around 1762 by King Rajeswar Singha of Assam.

The town of Garhgaon, Assam has four gates of stone set in mud, from each of which to the Raja's palace, for a distance of three kilometers, an extremely strong, high and wide ridge has been constructed for the people to pass. Around the city, in the place of wall, there is an encompassing bamboo plantation running continuously, two kilometers or more in width. In short the city of Garhgaon seems to be spherical, wide and a combination of villages. Around the Raja's house an embankment has been made and strong bamboos have been planted on it close together to serve as a wall. Around it a trench has been dug which is deeper than a man's height in most places and is always filled of water. The enclosure is one kilometers and fourteen in circumference and inside it, high and spacious thatched houses have been built.

Outside the enclosure of the fortress, a flawlessly neat and pure mansion has been constructed for the residence of the Raja. The nobles have built very nice and strong houses near the royal palace. The Bar Phukan, who was the Raja's son-in-law, had laid out an extremely elegant and fresh garden within the grounds of his mansion. It was a pleasant spot and heart-ravishing and can be honestly said to be a pure abode. Owing to excess of dam, it is not the custom in this country to make houses on the surface of the ground; but they built their houses on platforms resting on wooden pillars.

Garhgaon palace still remains to be one of the main tourist attractions in Assam.