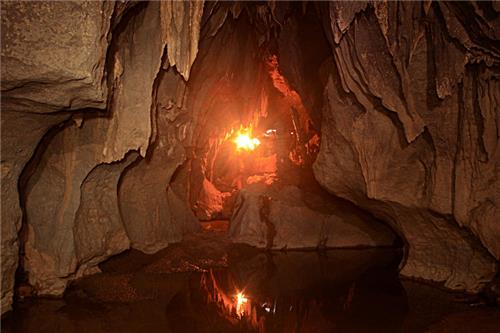 The spiritual description of this land has been made in various religious texts, which contains many secret notes about the places of worship, lakes, streams as well as the instructions to follow while making entry into this land. It is said that Lord Avalokiteshvara, God Indra and Five Sublime Incarnates showered their blessings on this Hidden Land in time immemorial in the past. In particular, during the 8th century A.D, Guru Padmasambhava also known as Guru Rimpochie visited this land during his quest for hidden land around Tibet, he found this to be one of the lands of peace and tranquility and thus was included it in the list of “Four Great Hidden Lands” which are significantly located in four cardinal direction of Tibet. He consecrated this land by means of meditating in various caves and concealing sacred objects in its caves, rocks and lakes. At the same time, he subdued all the dreadful spirits of this land and appointed them as Guardian of these hidden treasures. Guru Padmasambhava also known as Guru Rimpochie named this blessed land as Beyul Demazong the land between the four caves.

The North Lhari Nyingphug or the old cave of God is located on a hill situated north of Tashiding (in West Sikkim). It is known to be the holiest of the caves and commands a three-day walk from Tashiding.

The South Lho Kando Sangphug or the cave of the occult fairies- lies close to the Reshi hot springs on the Jorethang-Legship road. The cave and the hot spring can be accessed on foot across the river Rangit across a pedestrian bridge. On a rock one can still see many footprints believed to belonging to fairies.

The East Sharchog Beyphug or secret cave is situated between the Tendong and Maenam hills. The cave can be reached on foot from Sangmoo which is at a distance of 5 km from Ravangla. It is a huge cavern which is said to extend from the Tendong to the Maenam hill with height varying from five feet to one hundred or two hundred feet.

The West Nub Dechenphug or cave of great happiness is difficult to access and is situated near Dzongri. It is best reached in autumn when there is no snow.