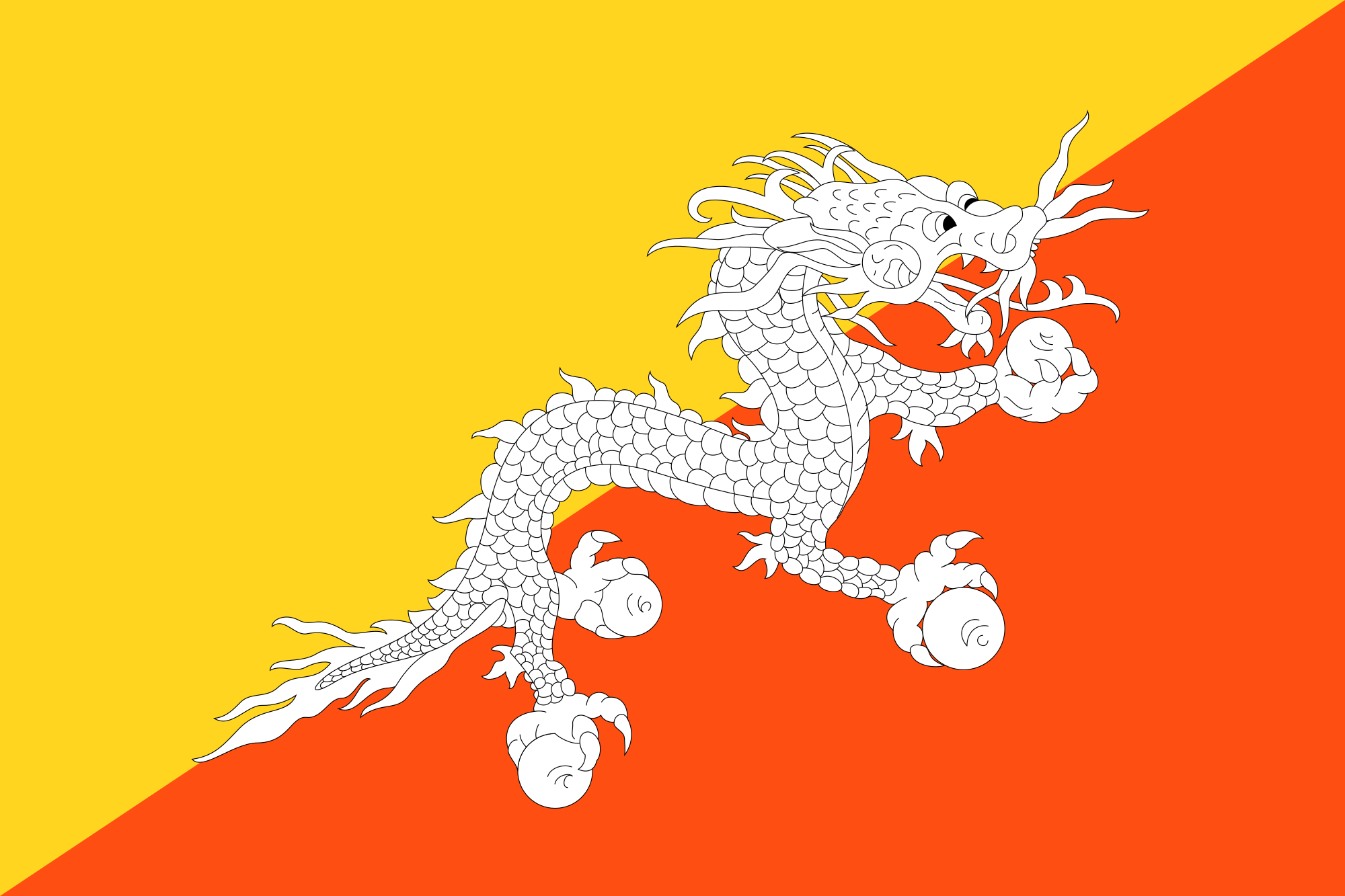 Bhutan, the tiny landlocked Himalayan monarchy in Asia has diplomatic relations with 52 states and the European Union.

In 1971, Bhutan began to develop its foreign relations by joining the United Nations even though Bhutan has no diplomatic relations with any of the permanent members on the UN Security Council. In 1981, Bhutan joined the International Monetary Fund and World Bank, which was consequently followed by the World Health Organization and UNESCO in 1982.  Bhutan is also an active member of SAARC. Bhutan is currently a member of 45 international organizations.

Under Article 20 of the Constitution of Bhutan which was enacted in 2008, Bhutan's foreign relations fall under the purview of the Druk Gyalpo (the King of Bhutan) on the advice of his Executive, namely the Prime Minister and other Ministers of the Lhengye Zhungtshog which includes the Minister of Foreign Affairs.

Here are the list of countries that have and maintain diplomatic relations with Bhutan:

Bhutan maintains diplomatic relations with sixteen European nations; while most of them are formal diplomatic ties, Switzerland formed the "Friends of Bhutan" group along with Japan. This group helps and contributes towards development projects in Bhutan. Other EU countries that do not have formal relations with Bhutan (such as France and Germany) are represented by the EU itself, which maintains a diplomatic relation that is separate from the countries that already have one of their own.

Bhutan does not recognize any of the parts or non-recognized states in addition to UN member states Israel and China (PRC).

Bangladesh is one of the only two countries to maintain a residential embassy in Thimphu. Bhutan was the first country in the world to recognize the independence of Bangladesh in 1971. In addition, these two states have also mutually agreed to develop hydropower in the Himalayas, as well as to initiate free trade and shipment through the Bangladeshi ports. They also cooperate in water resources management.

Both Bhutan and Bangladesh are members of SAARC and BIMSTEC.

Canada established diplomatic ties with Bhutan in 2003. Canada has a representative office in Thimphu.

Bhutan has no diplomatic relations with its northern bounding neighbour, the People's Republic of China. Bhutan happens to be one of the few countries to not recognize or have relations with either China or Taiwan. The border between Bhutan and China has been closed since the invasion of Tibet in 1959 which caused an influx of refugees. The border also remains undelineated. In 1961 China published a map that altered the traditional border since a long time. Since then, tensions have considerably lessened, especially after the signing of a 1998 agreement on border peace and tranquility which was the the first bilateral agreement between China and Bhutan. However, despite the lack of formal diplomatic relations, Bhutan has maintained an Honorary Consul in Macau since 2000 and also in Hong Kong since 2004.

In late 2005, Bhutan claimed that Chinese soldiers were building roads and bridges within Bhutanese territory. At the time, Bhutanese Foreign Minister Khandu Wangchuk took up the matter with Chinese authorities after the issue was raised in the Bhutanese Parliament. In response, the Foreign Ministry spokesperson Qin Gang of the People's Republic of China said that the border still remains in dispute and that the two sides should and are continuing to work together for a peaceful and cordial resolution of the border dispute. The Bhutanese newspaper Kuensel has said that China might use the roads built to further Chinese claims and interests along the border.

Historically, ties between Bhutan and India have always been close. Both of the countries signed a first-ever Friendship treaty in 1865 between Bhutan and British India. When Bhutan became a monarchy, British India was the first country to recognize it and renewed the treaty in 1910. In return, Bhutan was also the first country to recognize Indian independence and renewed the age-old treaty with the new government in 1949, including a clause that India would assist Bhutan in foreign relations. On February 8, 2007, the Indo-Bhutan Friendship Treaty was substantially revised under the Bhutanese King, Jigme Khesar Namgyel Wangchuck The revised treaty included in it the preamble which stated "Reaffirming their respect for each other's independence, sovereignty and territorial integrity”, an important element that was absent in the previous version of the treaty. The Indo-Bhutan Friendship Treaty of 2007 strengthened and solidified Bhutan's status as an independent and sovereign nation with the passage of time.

A bi-lateral agreement also exists between Bhutanese and Indian Government wherein the citizens of both nations can travel freely in the other country without having to issue a passport and visa.

Nepal and Bhutan established relations in 1983. However, since 1992, relations with Nepal have been tense due to the repatriation of refugees from Bhutan.

Pakistan and Bhutan established relations in 1988.

The Philippines and Bhutan have no formal relations yet. However, Philippines embassy in New Delhi, India serves as a representative of dialogues with Bhutan. Numerous senators and high-profile personalities from the Philippines have made a visit to Bhutan and have been pushing for the Gross National Happiness index to also be applied in the Philippines. The Philippines have been citing its effectiveness and efficiency in nation-building, environmental and cultural conservation, and human rights upholding after the Bhutan visit. Filipino Senator Loren Legarda, a United Nations Global Champion for Resilience, has also been pushing for greater and stronger diplomatic relations between the two countries. In September 2014, the Prime Minister of Bhutan made a visit to the Philippines and the Asian Development Bank headquarters in Manila. In 2018, the Philippines sent its engineers to Bhutan's capital city of Thimphu in a bid to develop Bhutan's space program.

Bhutan has relations with some other nations based on transnational issues. The issues included are extradition, terrorism, and refugees. To a limited extent, Bhutanese law provides frameworks for cooperation with countries in which Bhutan has no formal diplomatic ties or missions.

Bhutan has a legislated policy on the extradition of criminals, both to and from the kingdom. Any nation, with or without formal relations, may request the extradition of fugitives who abscond to Bhutan. The Extradition Act of Bhutan requires the extraditing nations to provide "all relevant evidence and information" about the accused, after which the Royal Government may refer the matter to the High Court of Bhutan in its discretion. The Court may then issue a summons or warrant, conduct an inquiry, and collect evidence. They then hold the accused for a maximum of 30 days. Alternatively, the Royal Government may also refer the matter to the courts for trial within Bhutan. Bhutan imposes punishments for offenses committed in treaty states generally, and for offenses in other states resulting in a return to Bhutan. Offenses are weighed according to the gravity of the act which is determined by a schedule and two-part test: extraditable offenses are those enumerated (including murder, theft, forgery, and smuggling), of which in Bhutan, the accused would be punished by a prison term exceeding twelve months. All felonies in Bhutan are punishable by a minimum of three years' imprisonment.

Bhutan will refuse requests for extradition if the Royal Government or its courts determine that the person is being accused of a politically inclined offense.

Bhutan cooperates with India to expel the Indian Nagaland separatists. Since they are still lacking a treaty describing the boundary between Bhutan and China, these two countries continue negotiations in time to establish a common boundary alignment in order to resolve territorial disputes arising from substantial cartographic discrepancies, the largest of which lie in Bhutan's northwest region and along the Chumbi salient.

The U.S. has offered to resettle 60,000 of the 107,000 Bhutanese refugees of Nepalese origin who are currently living in seven U.N. refugee camps in southeastern Nepal. Six other nations—Australia, Canada, Norway, Netherlands, New Zealand, and Denmark—have also offered to resettle 10,000 each.

Other countries also operate resettlement programs in the camps. Norway has already settled 200 Bhutanese refugees, and Canada has agreed to accept up to 5,000 through to 2012.