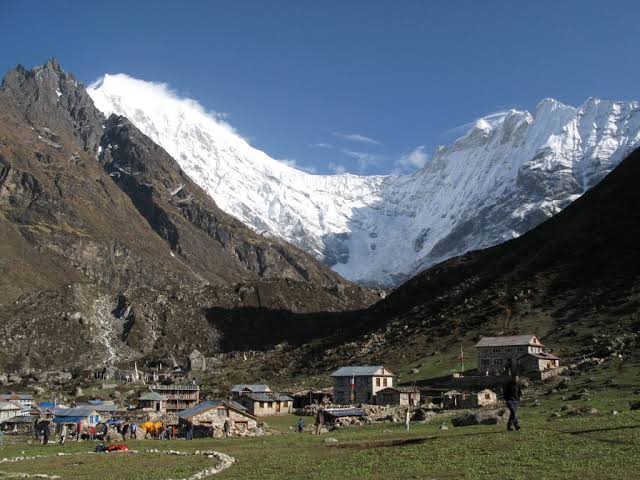 Even if you know nothing of its recent history, Nepal’s Langtang is a special part of the world. By choosing to spend time in Langtang and with its people, you can perhaps gain richer insights into what life is really like here, beneath the great snow-covered mountains of Nepal. In Langtang, local Nepali people are incredibly keen to see trekkers come back—and the welcome you receive will be genuinely warm and occasionally emotional. On this trek, you pass through three different regions that each possess their own distinctive character; the snow-capped peaks of the high Langtang Valley, the rugged beauty of Gosainkund Lake and its satellites, and the rich cultural heritage of the Helambu Valley. In fact, it is more like three treks rolled into one!

The name Langtang comes from the Tibetan language where “Lang” means “yak” and “Tang” means “to follow.” Langtang Valley is a beautiful valley to the north of Kathmandu. The small Langtang valley borders Tibet in the north and small snowy peaks in the south. The region covers Langtang National Park— a pristine countryside with majestic flora and fauna, yak pastures, and local cheese factories! The park is home to the Gosainkunda Lakes, which are sacred to the Hindus and Buddhists.

Partly protected as Langtang National Park, the Langtang River passes through the high, gentle Langtang Valley before emptying in a raging torrent into the Bhote Kosi River through a long, narrow defile at the west end of the valley. The major rivers of Nepal flow south from Tibet cutting through the Himalayan chain. The Langtang Khola, a major tributary of the Trisuli Ganga, flows east to west, cutting, as it were, across the grain of the country.

The trek starts from the small town of Syabru Besi, which takes 8 hours of driving from Kathmandu. You’ll drive along the scenic banks of Trishuli River with views of the Annapurna Himalayas in the west, and views of Manaslu, Ganesh Himal, and the peaks of the Langtang region ahead. From Syabru Besi, the trail begins passing through small villages, farmlands, and streams, paired with lush pine, bamboo, and rhododendron forests. During the spring, the bright red blooming rhododendrons are a delight to look at. These lush, lively forests house the elusive yet beloved Red Panda, in addition to many other animal species. The biodiversity along the trek is rich and well-preserved. The trek will give you many opportunities to have a glimpse at the local life. Langtang region has been a popular trans-Himalayan trade route from the ancient and medieval periods. The people in this place are mostly of Tamang and Tibetan origin. As you walk through the lower part of Langtang Valley, you’ll pass through rich forests, filled with birds and the occasional monkey. Tamang villagers grow their crops on steep terraces. Slowly, you’ll pass through to thin pinewoods split by waterfalls and then on to the high valley with yak pastures, open skies and glaciers, and the homes of the Langtang people. Throughout the region, you’ll find some of the best flower displays in Nepal and a blend of cultures from Newari, Hindu, Tamang, Bhutia, and Sherpa communities. Like other treks in Nepal, you’ll be staying in the teahouses, which are mostly looked after by the locals. This is your chance of befriending the people from the region—they are warm, welcoming, and extremely helpful.

The trail climbs gradually passing through the tiny villages and chortens along the hill. After crossing several small streams and moraines, the trail makes a final push towards Kyanjin Gompa, the famous village that is named after the monastery there. You have to make some steep ascents, but you get rewarded with amazing views of the mountains further north. You can enjoy the panoramic view of Dorje Larpa, Langtang Ri, Langtang Lirung, and several other peaks. The village is tiny but has a lot to offer. There is a cheese factory here that you should definitely visit. There are several charming cafes that offer a beautiful mountain view with a cup of hot chocolate. And then there is the ancient monastery of Kyanjin Gompa where you can meet the monks and learn about Buddhism.

From Kanjin Gompa you can make great day trips to explore the area. Go for a day hike to Kyanjin Ri, the highest elevation of the whole trek. The hike can be exhausting at times but the magical views will help you to look beyond the exhaustion. You’ll see the colossal Langtang glacier, and if you walk a little further up, you’ll reach the beautiful yak pasture called Langshisha Kharka. It looks like a fairytale with beautiful snowcapped mountains forming the backdrop while the yaks lazily roam around. Kyanjin Ri offers magnificent 360-degree views of Langtang valley and snow peaks. And on a clear day, you can see all the way into Tibet.

A chorten along the route

Why is the Langtang Valley Trek popular?

(1) The Langtang Valley trek is spectacularly beautiful and the trail is gifted with sublime mountain views and impressive scenic landscapes. You’ll be amazed by the panoramic view of snow-capped mountains such as Langtang Ri, Langtang Himal, Langsisa, and Ganjala Peak. You’ll pass through stunning forests, high alpine meadows, and yak pastures.

(3) You’ll stay in interesting tea houses along the route.

(4) You’ll escape the busy trails of Annapurna and Khumbu, which can, at certain times of the year, make you feel like just a face in the crowd.

(5) You’ll gain an insight into the lifestyle and culture of the Tamangs who are predominant inhabitants of the region and whose culture goes back to hundreds of years. The craftsmanship, dress, traditionally-built stone houses, and the beautifully carved wooden porches reflect their rich Himalayan heritage.

(6) You will provide vital support for locals who lost everything in the Nepal earthquake of 2015 where many villages around Nepal saw significant damage.

High above Langtang village, part of the great peak of Langtang Lirung sheared off, and a huge avalanche of ice and rock buried homes and lodges. Many died and the survivors of the landslides caused by the earthquake were forced to leave the valley. But they came back and worked incredibly hard to get back on their feet. They rebuild their homes and re-establish their farms. Trekking routes were open once again and the valley started calling the trekkers back.

The stunning snow-capped mountains
Essential Information for the Langtang Trek
To do the Langtang Trek, you will require an entry ticket to the National Park and the Trekkers’ Information Management Systems (TIMS) card. The TIMS card needs to be purchased in Kathmandu; the entry for the National Park can be bought on the way, in Dhunche. Carrying your original passport for this is essential. As regulations can change quite frequently, make sure to ask your agency before you leave if you have to get any permits in Kathmandu.
How Difficult is the Langtang Trek?
The Langtang trek is considered moderate. It’s a great introduction to trekking the Himalayas, particularly if you are nervous about the more high altitude expeditions. The highest point on the trail is 3,800 meters. However, you will have the option to go higher if you wish. The Langtang trek can be completed by anyone with a basic fitness level and some determination.

A small village in the Langtang Valley

The fall season (September – mid-December) and the spring season (March-May) are the best seasons for the Langtang Valley Trek. The climate is very pleasant and moderate with beautiful views. The months from October and December provide the clearest skies but spring is when the whole evergreen forest covered with the blossom of colorful rhododendron blossoms makes the trail look the prettiest.

How to Reach Langtang

Take a flight to Kathmandu, which has the only international airport in the country. From there, you can either take a public bus to Syabrubesi or hire a Jeep.

Nepal’s Langtang Trek is the perfect trek if you want to combine the cultural experience with the beauty of nature. This will be an amazing experience that will stay with you forever!