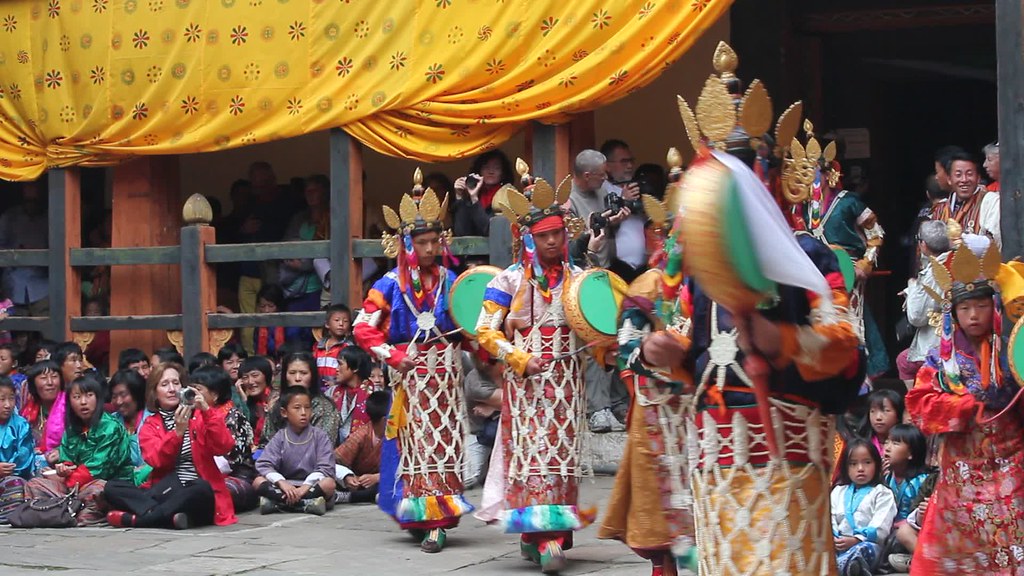 Festivals of the Druk Kingdom - Bhutan

Every country has its own festivals and celebrations that people come to associate the land with and with time, becomes part of the cultural identity of the place. The Land of the Thunder Dragon a.k.a. Bhutan is no different. It is often called the Last Shangri La and is a country that has closely guarded its rich cultural heritage against the onslaught of westernization that has overtaken all the neighboring countries. The absence of sky-scrapers and the majority of the populous moving in their national dresses are the first thing to strike any visitor here.

Let us delve briefly into the festivals of Bhutan and get a glimpse of this treasure of the Himalayas.

(1) Tshechu Festival: This is a religious festival meaning "tenth day" of the lunar calendar. It is held annually in various temples, monasteries, and dzongs throughout the country of Bhutan.

An enormous crowd gather every year to witness the dances

Religious mask dance forms, food, and costumes make different forms of entertainment in festivals of Bhutan. The Bhutanese believe that everyone must witness a Tschechu and the mask dance once in their lifetime to seek blessings and wash away their sins.

(2) Nimalung Festival: In the Nimalung festival of Bhutan, the monastery is decorated with murals of the Nyingmapa and Drukpa traditions, paintings of Guru Rimpoche and his disciples, the lineage of Terton Pema Lingpa, and several Buddhist masters affiliated with the monastery. Nimalung Lhakhang is located in Chumey in Bumthang district, central Bhutan. It is approximately a 15-minute drive from the road that branches off from the village of Chumey.

(3) Nomad Festival: This annual festival of Bhutan is appropriate if you don’t like to set your feet at a place. This is Bhutan’s Nomad festival. It is held in Bumthang Dzongkhag (district) in central Bhutan the spiritual heartland of the country.  Bumthang is approximately an 8-hour drive from the capital city of Bhutan, Thimphu.

Spectators riveted at the ongoing performance

This festival gives a glimpse of communities in Bhutan that have been the original habitants and have survived unchanged, enabling you to find the best local cuisine during this festival.

(4) Sakteng Festival: It is celebrated by the Brokpas in Bhutan is a three-day annual festival. The entire valley comes together to offer prayers and seek blessings from their deities.