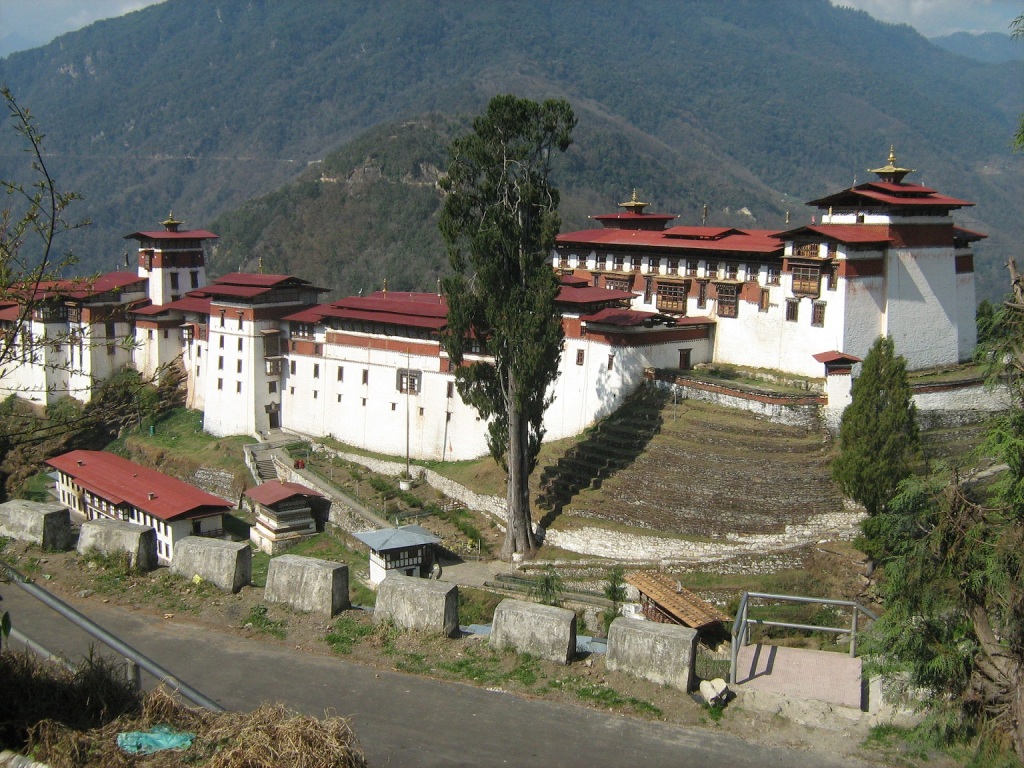 URL copied.
Cancel
Drukgyal Dzong
Drukgyal Dzong was a fortress and Buddhist monastery, which is now in ruins. It is located in the upper part of the Paro District, Bhutan. The dzong was probably built by Tenzin Drukdra in 1649 at the behest of Ngawang Namgyal, Zhabdrung Rinpoche, to commemorate victory over an invasion from Tibet.
In the early 1950s, Drukgyal Dzong was almost completely destroyed by fire. It is listed as a tentative site in Bhutan's Tentative List for UNESCO inclusion.
In 2016, to celebrate the birth of The Gyalsey, as well as to commemorate two other significant events, namely, the arrival of Zhabdrung Ngawang Namgyel to Bhutan in 1616 AD and the birth year of Guru Rinpoche, the Prime Minister Lyonchen Tshering Tobgay announced that the Dzong will be rebuilt and reinstated to its former glory. The announcement and ground breaking ceremony took place a day after the Prince was born.
Punakha dzong

The Punakha Dzong, also known as Pungthang Dewa chhenbi Phodrang, is the administrative centre of Punakha District in Punakha, Bhutan. Constructed by Ngawang Namgyal, 1st Zhabdrung Rinpoche, in 1637–38, it is the second oldest and second largest dzong in Bhutan and one of its most majestic structures. The dzong houses the sacred relics of the southern Drukpa Lineage of the Kagyu school of Tibetan Buddhism, including the Rangjung Kharsapani and the sacred remains of Ngawang Namgyal and the tertön Pema Lingpa.
The town shares its name with the dzong built in 1638 that dominates the district. The name is said to have been given by Ngawang Namgyal, the 1st Zhabdrung Rinpoche, who was searching for the best location for a dzong to prevent incursions from the south. At the chosen spot, the Zhabdrung encountered a boy named Wangdi playing beside the river and hence named the dzong "Wangdi's Palace".
Wangdi phodrang
Wangdi Phodrang Dzong in Bhutan burnt down in the afternoon of 24 June 2012. However, the dzong was being renovated at the time, so most of the historical relics had already been put into storage and were saved from destruction. Shortly after the fire, more than 1000 Japanese sympathizers donated an equivalent of over US$134,500 to the Wangdue Phodrang Reconstruction Fund. Other donations have also arrived, but reconstruction is still underway as of 2014.
Rinpung Dzong
Rinpung Dzong is a large dzong - Buddhist monastery and fortress - of the Drukpa Lineage of the Kagyu school in Paro District, Bhutan. It houses the district Monastic Body and government administrative offices of Paro Dzongkhag. It is listed as a tentative site in Bhutan's Tentative List for UNESCO inclusion.
In the 15th century local people of Bhutan offered the crag of Hungrel at Paro to Lama Drung Drung Gyal, a descendant of Pajo Drugom Zhigpo. Drung Drung Gyal built a small temple there and later a five storied Dzong or fortress which was known as Hungrel Dzong.
In the 17th century, his descendants, the lords of Hungrel, offered this fortress to the Drukpa hierarch, Ngawang Namgyal, the Zhabdrung Rinpoche, in recognition of his religious and temporal authority. In 1644 the Zhabdrung dismantled the existing dzong and laid the foundations of a new dzong. In 1646 the dzong was reconsecrated and established as the administrative and monastic centre of the western region and it became known as "Rinpung Dzong".
Trongsa Dzong
Trongsa Dzong, the largest dzong in Bhutan at a striking location, is an important administrative building, providing the headquarters of the government of Trongsa District. Trongsa provides a strategic central location to control Bhutan and for centuries it was the seat of the Wangchuck dynasty of penlops (governors) who effectively ruled over much of eastern and central Bhutan, and from 1907 have been Kings of Bhutan. It is also a major monastic complex, with around 200 monks. During the summer months, the monastic community often relocates to Kurje Monastery in the Bumthang Valley. It contains a notable printing house, responsible for the printing of many religious texts in Bhutan.). It is listed as a tentative site in Bhutan's Tentative List for UNESCO inclusion.
Trashigang Dzong which means The Fortress of the Auspicious Hill is one of the largest dzong fortress in Bhutan, located in Trashigang in Trashigang District of Bhutan. The fortress was built in 1659 to defend against Tibetan invasions. The dzong hosted a monastic community besides acting as the central administrative center of the Trashigang District, before they were shifted due to the ongoing restoration.
According to legend, the sight of the Dzong scared the Tibetan army which retreated while remarking that the Dzong was a "Sky Dzong and was not on the ground". The dzong was further expanded by Gyalsey Tenzin Rabgye between 1680 and 1694 and by Dzongpon Dopola in 1936. The dzong was consecrated and named as Trashigang by Dudjom Jigdral Yeshe Dorje. After the 1962 Sino-Indian War, Bhutan allowed Indian soldiers returning home to pass through Eastern Bhutan. However they were required to deposit their rifles at the armoury in the Dzong, and proceed through Bhutan unarmed. The rifles lie in the Dzong to this day. The dzong celebrates the four day long Trashigang Tshechu festival every year, with around 1500 people attending the celebrations on each day.
Tamzhing Lhündrup Monastery
The temple in Bhutan was built by Pema Lingpa in 1501; the coeval wall paintings include his portrait and are amongst the earliest in the country.
Before 1960 Tamshing was a privately owned temple (like majority of temples in Bhutan). After Pema Lingpa died in the temple at the age of seventy-two in 1521, his descendants took over care of the temple. Gradually, over many years, Tamshing fell into a state of disrepair and neglect. The temple courtyard was used as a granary and local people came less and less, except for special days.
In 1959, when many Tibetans (including the present Dalai Lama) fled their country for fear of being killed quite a few came to the Bumthang region in Bhutan, which is the cradle of Buddhism in Bhutan.
Photo credit: Mohammad Amaan