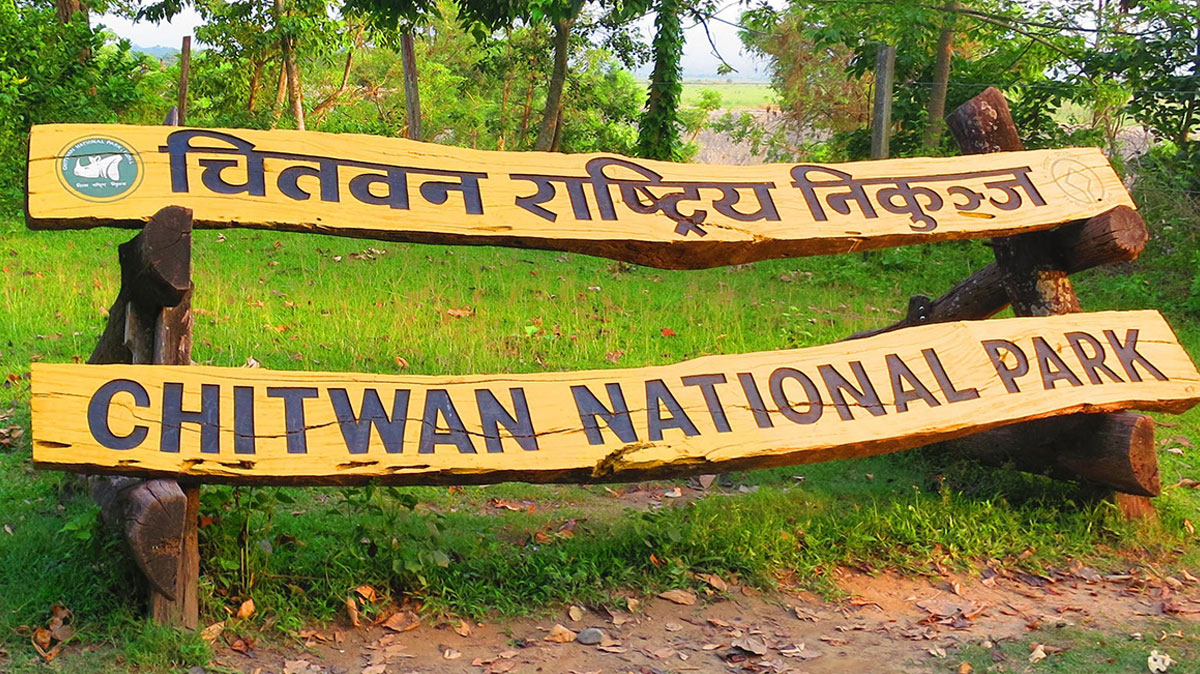 Chitwan National Park is one of the premier drawcards in Nepal. Being the first national park in Nepal, the term Chitwan is translated in the local language as “heart of the jungle.”

This World Heritage-listed reserve, which was established in 1973, protects more than 932 sq km of forests, marshland, and grassland containing sizeable animal populations, making it one of the best national parks for viewing wildlife in Asia. It is located in the subtropical Inner Terai lowlands of south-central Nepal in the districts of Nawalpur, Parsa, Chitwan, and Makwanpur.

You’ll have an excellent chance of spotting one-horned rhinos, deer, monkeys, and more than 500 species of birds. If you’re extremely lucky, you may spot a leopard, wild elephant, or sloth bear – though it’s a once-in-a-lifetime chance to spot a majestic royal Bengal tiger that is the premier attraction. You’ll also have the chance to experience domesticated elephants, although how that interaction takes place is now undergoing a paradigm shift driven by animal rights concerns. There is a daily admission fee that is normally bundled into the overall cost of a tour.

Jeep safari inside the national park

Different Areas in the Park

1. Amaltari (Western sector): This is one of the entrances for the park. This is preferred by the tourists as it is closer to the Mahendra Highway. This region has the Rapti, Narayani, and Reu rivers. This is the right place to spot a lot of animals. Jeep safari and other safaris cover this region.

2. Kasara (Mid sector): This region holds the museum and the park headquarters. You can find a famous religious site- Bikram Baba in this region. A little away from the headquarters, you will find the Gharial Breeding Centre, where crocodiles, turtles, and muggers are bred. This region is usually covered on foot.

3. Madi-Bagai (Southern sector): This is the deep forest region. Tourists usually are not taken to this part of the jungle.

4. Sauraha (Eastern sector): This is the eco-tourism region. You can find many development activities like resorts, safari route, birdwatching sites, and others. Sauraha is another important entrance to the park. This region covers the Churia hill regions. You can find rare species in this region. Sauraha has a wildlife conservation program, souvenir shop, gift shops, and others in the visitor centre.

History Behind the Heart of the Jungle

Since the end of the 19th century, Chitwan used to be a favourite hunting ground for Nepal’s ruling class during the cool winter seasons. Until the 1950s, the journey from Kathmandu to Nepal’s south was arduous as the area could only be reached by foot and took several weeks. Comfortable camps were set up for the feudal big game hunters and their entourage, where they stayed for a couple of months shooting hundreds of tigers, rhinoceroses, leopards, and sloth bears. When poor farmers from the mid-hills moved to the Chitwan Valley in search of arable land, the area was subsequently opened for settlement, and poaching of wildlife became rampant. It is said that in 1911, King George V with his son killed 39 tigers and 18 rhinos in a single safari in this region. Even after being a reserved hunting spot, the loss of habitat and human encroachment was carried on by illegal hunters and poachers.

In 1954, a large area of the forest region was converted into farmland, leading to habitat loss in a large range. By the end of 1960, there were only 20 tigers and 100 rhinos in this region. This decline became big news, and King Mahendra of Nepal immediately announced it to be a national park and banned the poaching of animals. When the first protected areas were established in Chitwan, Tharu communities were forced to relocate from their traditional lands. They were denied any right to own land and thus, forced into a situation of landlessness and poverty. When the Chitwan National Park was designated, Nepalese soldiers destroyed the villages located inside the boundary of the park, burned down houses, and beat the people who tried to plough their fields. Some threatened Tharu people at gunpoint to leave.

In 1984, the region became a heritage site. By 2000, the population of wildlife increased to 80 tigers and 544 rhinos. There were 450 species of birds and 50 different mammals flourishing in the region. However, the Maoist rebellions controlled a larger region of the forest. They started selling animal parts to Tibet and China. The government is trying to control poachers and reduce habitat loss in this region. The park’s headquarters is in Kasara. Close by, the gharial and turtle conservation breeding centres have been established. In 2008, a vulture breeding centre was inaugurated aiming at holding up to 25 pairs of each of the two Gyps vulture species—the Oriental white-backed vulture and the slender-billed vulture—now critically endangered in Nepal.

The basic flora of the region is the Himalayan Subtropical Broadleaf Forest. This type of vegetation covers most of the land with sal trees. These trees grow in the low-lying drained lands. The southern part of the park is covered with chir pine trees. The northern slopes of the region have both sal trees and a few wild and colourful flowering species. Some of the shrubs found in this region are rosewood, elephant apple, grey downy balsam, axlewood, beleric, and others.

Dry grasses are quite common here and thus, seasonal bushfire is natural. Recently, the alluvium deposited along the riverbanks is causing rhino apple trees and catechu to flourish in this region. Hill glory bower, velvety beautyberry, and hill glory bower are some of the shrubs found in this region.

About 20% of the forest is covered with grasslands and savannah regions. This region holds more than 50 species of the tallest grasses in the world. This includes elephant grass, giant cane, khagra reed, and kans grass.

Also, thanks to the diverse vegetation of the land, you can find numerous types of animals in this region. More than 700 species of fauna are spotted in this part. This excludes butterflies, insects, and moth populations. There are 19 species of reptiles, 113 species of fishes and crocodiles, and 68 mammals.

There are just 82 tigers in the park, as per the 2002 survey. Thus, spotting them is not easy. However, it’s easier to spot a leopard than a tiger. This park has the largest population density of sloth bears. Other common mammals to spot here are striped hyena, honey badger, Bengal fox, wild dogs, spotted linsang, fishing cat, small Indian civet, jungle cat, Asian palm civet, mongoose, and others. There are more than 544 rhinos in this park. You can find the largest population of Indian Rhinoceros in this park, in Nepal. Seasonally, you can find wild elephant bulls, which migrate from Valmiki National Park to this park for mating elephant cows. If you are visiting right after a bushfire, you will spot gaur. In the deer family, you can find chital, sambar, red muntjac, and hog deer. Four-horned antelopes are found in the hill regions. As mentioned, there are more than 500 species of birds. This includes threatened species of birds too. The important birds to spot here are Bengal florican, swamp francolin, grass warblers, oriental darter, kingfisher, egret, stork, grey-crowned prinia, and others. This park is one of the very few spots in the world to spot the endangered spotted eagle.

If you are visiting in autumn, you can find more than 160 migration bird species in this land like eastern imperial eagle, brahminy duck, fish eagle, bar-headed geese, goosanders, and others. The birds from the southern latitude visit the country during summer. The top species to spot are Bengal pittas, flycatcher, paradise flycatcher, and many others.

1. Jeep safari: There are two options for jeep safari. The short safari lasts from 4 hours. This safari will take a maximum of 7 people per trip in one jeep. The second type is the full-day safari. This safari starts early in the morning and takes you deep into the jungle. This safari offers a higher chance to spot animals.

Young visitors on a jeep safari

2. Elephant safari: This is the best option to spot rhinos and other large predators from close quarters. On top of this majestic creature, you are safe from many animals, as they fail to notice the humans on top of the elephant. You can go as close as one meter away from animals.

3. Canoe rides: Canoe rides are available on the Rapti River inside the park. This is the best way to spot animals that come to quench thirst. You can spot crocodiles and numerous animals and birds which rely on the river. A boatman and guide will row you through the water route.

Canoe ride inside the national park

4. Jungle walks: If you are ready for some physical activity, you can cover specific trails in the park on foot. The routes will cover small animals, colourful birds, and interesting species. A guide will accompany each group to cover the park, safely and thoroughly. If you are into birdwatching, this is one of the best options.

6. Elephant breeding centre: This is the major attraction of the region as you can watch the calves playing. You can feed them, bathe them, and take a ride on adult elephants.

A playful elephant splashing water on its riders

How to Reach Chitwan National Park

Inside the park, there are seven resorts run by the government, which provide wildlife activities, lodging, and food. Apart from these seven, there are numerous resorts, hotels, and lodges around the park.