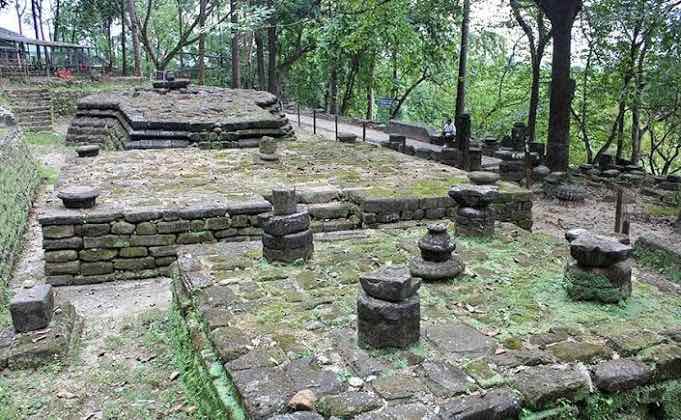 URL copied.
Cancel
Malnithan, is located in the foothills of the Siang hills in the lower Siang District of Arunachal Pradesh, near the town of Likabali. The temple complex was once an extravagant site but now completely in ruins, between 1968 and 1971, the site was unearthed and the entire complex was excavated. The ruins found gave indication that it was built using granite stones and had Aryan influence. This is quite unique to the region as most of the temples in Northeast were built with bricks. This led to the inference that the architects and the craftsmen involved in building of the temple are said to be brought from Aryan India, outside of Assam. It is now a renowned site for tourist and historians all over the world including the other places in India.
As the story goes Malnithan Temple got its name from an ancient folk lore, according to which when Lord Krishna eloped with Rukmini, the daughter of King Bhishmaka of Vidarbha, just before she was to get married to Shisupala. Instead to travelling to Dwarka from Bhimakanagar as the places decided, they travelled to east and stopped at Malinithan, where they received a warm welcome from Parvati, the consort of Lord Shiva. Parvati presented the new couples with garlands made of flowers plucked from her garden. Krishna was so fascinated by the scent and beauty of these flowers that he addressed Parvati as Malini, meaning "the mistress of the garden." That's how the place got its name - Malinithan.
There is another version of how the place got the name; a sculptor of a female without the head was unearthed during the excavations, which represented Malini one of the consorts of Shiva. The idol of goddess Durga found here is known as "Pupane" locally, translates to ancient name for the Divine Mother or Malini.
The excavated temple complex has four sculptures of lions on two elephants, granite sculptures of Indra riding his mount Airavata, Kartikeya riding a peacock; Surya (Sun) riding a chariot, and Ganesha mounted over a mouse, and a large Nandi bull. Besides these there are some sculptures along the periphery in different postures, which leads to inferences that during the time when temple was being built, tantrism was prevalent in the region as a rite of the tribal people. Tourist from all over the world make it a point to visit this place out all the places when in Assam and Arunachal Pradesh.