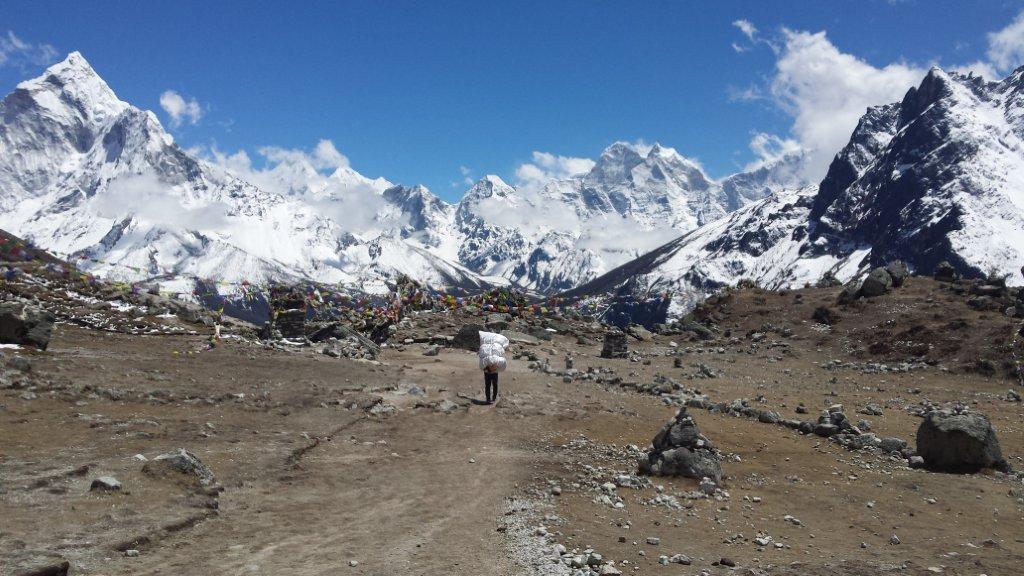 For adventure seekers like you, the 16 days Everest Base Camp Trek is filled with awesome mountain vistas along with highest peak of the world Mt Everest, rural lifestyle, Sherpa culture, Tibetan Buddhism, old monasteries and rich wildlife.
Have you set a dream to be close enough with Mt Everest, the highest peak in the world? Your dream gets fulfilled as you head for Everest Base Camp Trek. You will find yourself in a place higher even than clouds, miles away from the convenience of the modern lifestyle, but enjoying in the lap of nature which is surrounded with high mountains, lakes, waterfalls, and unique wildlife.

Your journey to reach the foot of Mt Everest begins with a thrilling flight from Kathmandu to Lukla. The Arial view of awesome mountainous landscapes increases the excitement to Everest Base Camp Trek. As soon as you find landed in Lukla, you find yourself entering in the land of Sherpa, the dwellers of the Himalayan region.

During your Everest Base Camp Trek, you find the grand White Mountains standing like the great wall of Nepal. While heading to Everest Basecamp, you cross many suspension bridges, narrow roads, lakes and shimmering waterfalls. The beautiful Everest Base Camp is situated at the height of 5,356m but we go a little higher than this. Now we are heading for Kalapatthar, at 5,550m, a great viewing point of majestic mountains of Everest region including Mt Everest, Mt Lhotse, Mt Choyu, Mt Makalu, Mt Pumori, and many others. Of course, the bluish glaciers and lakes are equally catchy like the snow-capped mountains.

Apart from awesome mountains, Everest Base Camp Trek route is the living museum for Sherpa culture where the unique stone-roofed houses, people’s facial complexion, language, fascinating attire, and typical rural lifestyle catch your eyes. The warm hospitality mixed up with a smile is a great appreciating character of Sherpa, living in this region.

On the way, we go through crossing the many traditional Sherpa villages like Namche Bazar, Tyangboche, Pangboche, Dingboche etc. The old monasteries with its interesting legends, prayer wheels, and prayer flags are part of your Everest Base Camp trek and expand your knowledge on spiritual Buddhism.

Not only this much, during the Everest Base Camp Trek, but you also have a high chance to have a glimpse at red panda and snow leopard as this is the habitat of these endangered animals. This place is also recorded as the storehouse for rich medicinal herbs and unique biodiversity.

When should you trek Everest Base Camp?

You have two best seasons to trek in Everest Base Camp, namely Spring and Autumn. Spring in the month of March, April and May, the time to delve in deep with redness of rhododendron flower and Autumn in the months of September, October and November having clear mountain vistas and recreational time of wildlife.

In other seasons, acute cold and foggy weather may lack the enjoyment of Everest Base Camp Trek.