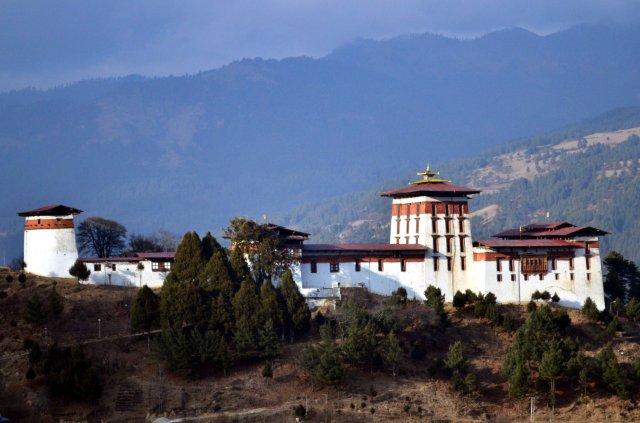 URL copied.
Cancel
Dzongs are a common sight in Bhutan and are centers of both administration and religion. A dzong is an architectural masterpiece and constitutes a fortified building that incorporates both administrative and monastic institutions. They are an integral part of local community as they serve a number of purposes besides being administrative and religious centres such as homes for the clergy, a garrison for army personnel, and a venue for religious festivals (Tsechus).
There are 2 major dzongs in Central Bhutan: Jakar Dzong and Trongsa Dzong.
Jakar Dzong
Also known as Jakar Yugyal Dzong, this dzong is found in the Bumthang District of central Bhutan. The name is a derivative of the word bjakhab, meaning “white bird.” According to popular myth, a white bird signaled the site as the foundation for the monastery.
Trongsa Dzong
This is the largest dzong fortress in Bhutan and is located in Trongsa in Trongsa district. Built on a spur overlooking the gorge of the Mangde River, the site previously housed a temple, which was established by the Drukpa lama, Nagi Wangchuk son of Ngawang Chhojey. In 1647, the temple was replaced with the Chökhor Rabtentse Dzong by his great-grandson Shabdrung Ngawang Namgyal. During the 18th century, the dzong was enlarged several times: the Chenrezig Lhakang was built in 1715 and a whole complex, including the Maitreya (Jampa) temple, was added in 1771. The 1897 earthquake severely damaged the dzong and since then it has undergone several renovations.
Trongsa Dzong houses the headquarters of the government of Trongsa District. For centuries it was the seat of the Wangchuck dynasty of penlops (governors) and later the kings of Bhutan. There is a large monastic complex inside, with around 200 monks. During the summer months, the monastic community moves its location to Kurje Monastery in the Bumthang Valley. Among many notable things, it contains a printing house, where many religious texts are printed using traditional means of woodblock printing. It is listed as a tentative site in Bhutan's tentative list for UNESCO inclusion.
Way to Trongsa Dzong
Till 1970, Trongsa Dzong was only approachable from the upper reaches of the Mangde Chu valley. The trail traverses through farms, forests, and streams before ascending up to Tangsibji village and then descending to the Mangde Chu valley. High-altitude dwarf bamboo, which is used for making paper, flanks the route. The rhesus macaques are a common sight on this route.
Trongsa Dzong can be reached from Thimpu by road and takes about 7 hours. The road passes through mountain ranges.
Architecture
Trongsa Dzong is a splendid example of dzong architecture. The expansive complex, the largest in Bhutan, houses 25 temples and has a number of courtyards. The most important temples are dedicated to tantric deities. The fortress has a watchtower named Ta Dzong, which towers above the gorge on the east side of the dzong. The watchtower houses a temple that was made in honour of the warrior god, King Gesar. In later it was converted into a museum.
Aside from its central administrative offices, Trongsa is a major monastery and today houses around 200 monks.
Festival
The 5-day festival known as the Trongsa tsechu is held here during December or January to celebrate the arrival of Guru Rimpoche to Bhutan in the 8th century. Masked dances are performance at this festival and you can also witness the fire blessing, where people run through "an archway of blazing straw."