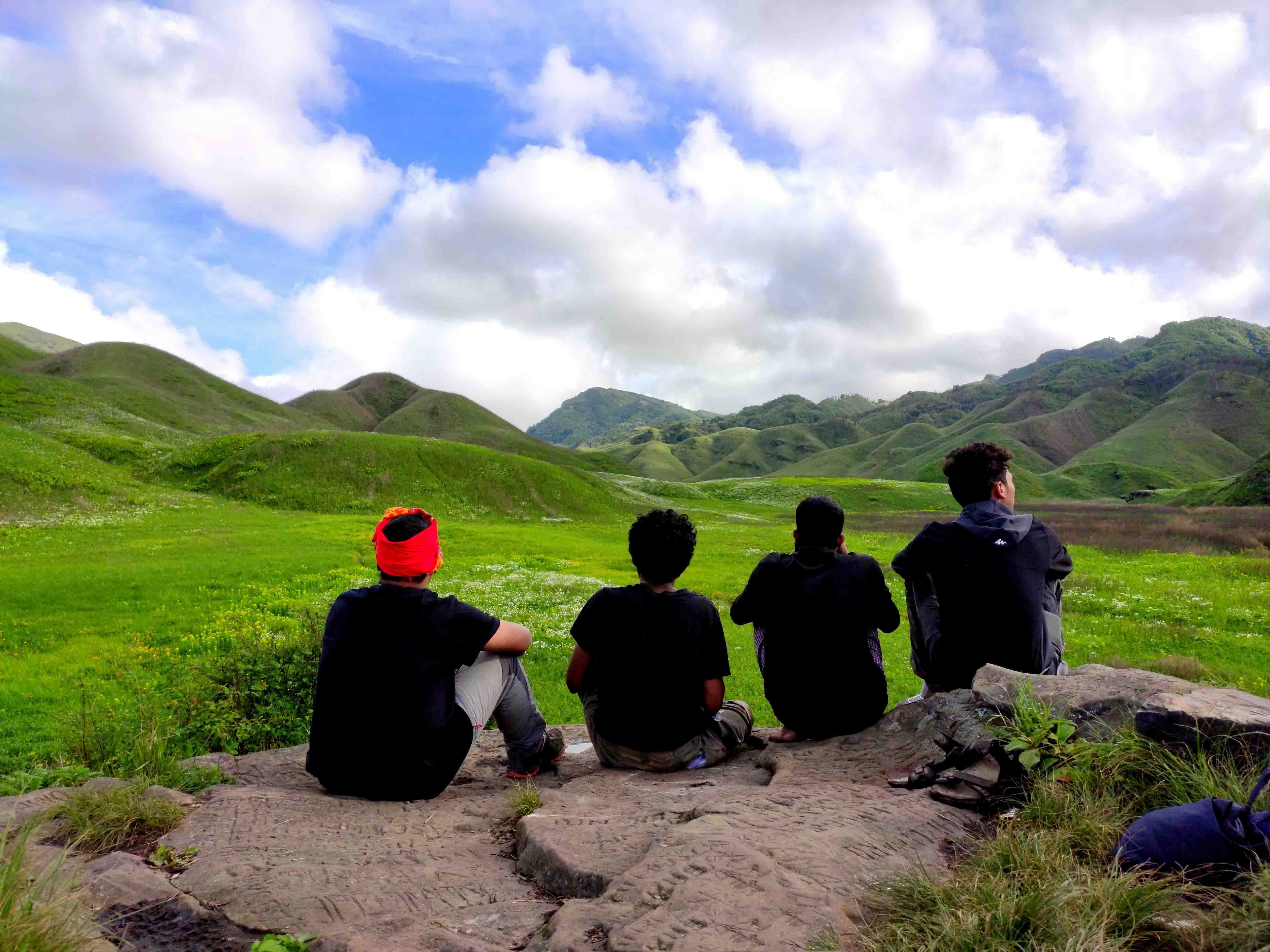 The yearning for Dzükou Valley was sown into my soul on reading an article about it for the first time in 2015; Arunabh and I had just concluded our backpacking trip to Meghalaya. Opportunities did present themselves twice in 2017, but I had to leave for Puducherry to pursue my Master’s Degree; and that’s exactly where the story of the four adventurous souls began.

Tagore Hostel, Pondicherry University, is where Joseph, Abhijeet, and I met. The first thing we discussed was about adventure, travel, and mountains; a trek together was imminent. As my days in Puducherry were coming to an end, my soul was craving for a trek—to be somewhere away from the busy streets and amidst the birds, hills, and streams. The trek to Dzükou Valley bestows on you with that experience.

Welcoming Joseph and Navajith with the taste of aloo pitika (Assamese term for mashed potato) to Guwahati on 11th June and ending the 4-year wait, the story of the four of us— hailing from Assam, Kerala , and Uttar Pradesh— in the pursuit of visiting Dzükou Valley, thus began.

The next day we travelled to Kohima. With the National Highway 29 (connecting Assam-Dimapur-Kohima-Manipur) under construction, the dusty road, the heat, and our daredevil driver, it was one heck of a bumpy journey. The rain that showered halfway to Kohima, the clouds and hills alongside the road merging into one, the sunset and the fog welcoming us in Kohima are moments I’ll cherish. Starting the day with sweat and heat and ending the day with foggy, cold, drizzling Kohima evening was refreshing.

Unlike other hill stations, Kohima town closes by 6 in the evening. Reaching around 7:30 pm, our search for a place to stay began immediately. The weather comforted our minds. As luck favoured, we found a signboard that read “Backpackers.” It was the Central Guest House beside the Nagaland State Transport bus stand. Decorated with beautiful photos reflecting the rich culture of Nagaland, a balcony with a beautiful view of the city, this hotel was worth it. Staying in a dormitory for the first time was exciting. The map of Nagaland on the entrance of the dorm helped me reminisce about Mount Saramati, the route we took crossing Kohima, Jessame, and Pungro. With the clouds clearing up and the hills shining gloriously against the starry sky, we freshened up and set out for a walk. Strolling through the lanes, gazing at the beauty of the twinkling hills, and then striking up a conversation with a lady street vendor while eating steamed Momo was satisfying.

To learn, to embrace, and to fill in the soul with everything the hike and the valley offer in its purest form was the motive. We avoided watching videos on Dzükou Valley on the internet. Uncertain and un-planned as we were, the day began in trying to figure out how to reach Dzükou Valley from Kohima. What we did know was that the valley is accessible through two hiking trails - Jakhama and Viswema. I could sense the thrill in each of us as we loaded our rucksacks on our backs at the Central Guest House, Kohima. The footbridge, painted like a colourful musical keyboard in the centre of the town, made me recall about my first visit to Kohima in 2016 (Mt. Saramati Expedition), but the colour had faded. The taxi drivers waiting nearby, however, presented us with something that hadn't faded- high taxi fare. A healthy breakfast was due, and we kept marching ahead. Enquiring the locals, we boarded a local bus to B.O.C., the place from where sumos ply to Jakhama and further. The meal at Happy Food restaurant was delicious—the best a foodie could get at a reasonable rate. After half-an-hour of Sumo Sawari, we reached Jakhama.