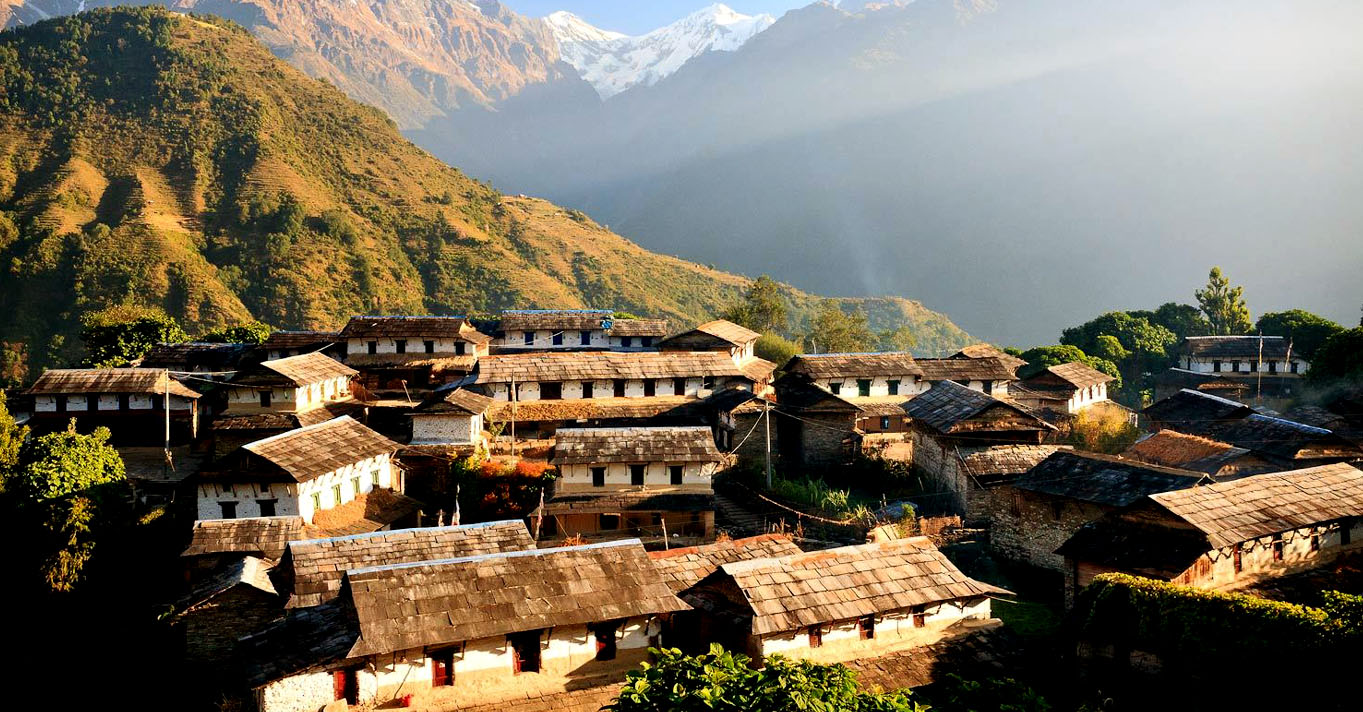 Mesmerising foreign travellers since a millennium, the Dhampus trek is one of the classic treks of Nepal. It offers a fabulous trekking adventure inside a serene, natural trail filled with amazing mountain views and gives you the opportunity to explore a land that is inhabited by diverse people.

The 5-day trek takes you through the ethnic Gurung village of Dhampus, which gives you an opportunity to witness their daily lifestyle. The warm and friendly hospitality of the Gurung people is a great treat for visitors and is bound to leave you astonished. Apart from this, the trek offers stunning views of the Annapurna range. There is a lot to enjoy within this short trek in Nepal—being one of the shortest treks around Pokhara Valley, it takes you through 3 different popular viewpoints: Dhampus, Naudanda, and Sarangkot. It is a perfect trip to those trekking enthusiasts who have limited time in Nepal. The place also serves as one of the main entry points to the Annapurna Base Camp and to other trekking trails in the Annapurna region.

How to Reach Dhampus

The trip to Dhampus Village begins from Phedi Village, which is nearly a 15-min drive from the gorgeous lakeside city of Pokhara. The overwhelming elevation differences between the Annapurna and Dhaulagiri ranges make Dhampus peaks a vantage spot to observe the mountains with Tukuche Peak-6920 m and Dhaulagiri-8167 m enormously close to you. From here you trek alongside beautiful views of golden rice terraces on the vast expanse of the Annapurna Mountain range. This 2-hour climb to Dhampus continues through a magnificent rhododendron forest nesting various species of birds to the village of Chandrakot. When you emerge from the forest and reach Dhampus, you will be able to marvel at the exceptional view of the massive Mt. Machhapuchhare. It is popularly known as Fishtail Mountain (6900m) because its peak resembles the shape of a fish’s tail. From Dhampus you can also grab the exceptional view of Pokhara, and the scenery gets even better as the sun goes down.

It is from Dhampus where you get the best view of the Annapurna Region without going to Annapurna. Everyone who treks to the Annapurna Base Camp must go via Dhampus.

The hike usually starts early in the morning post breakfast. After spending a night in a lodge or a hotel, you will have to head to Phedi. Phedi is about 18 km away from Pokhara. It takes anywhere between 30-45 minutes to reach there.

The trek starts from Phedi. You take the oldest trail to Dhampus, which is rarely used by the locals since the motorway was built. This trail will lead you through the forest and several villages. It takes around 90 minutes to reach Dhampus. As you walk through the forest, you can enjoy the peaceful environment and can occasionally spot various species of birds. The sound of chirping birds and crickets blend to create soothing music of nature. As you approach Dhampus Village, the view of Annapurna unfolds gradually, and by the time you reach Dhampus, you will eventually be able to see Fishtail (Machhapuchhre) and Dhaulagiri to Lamjung.

After arriving at your hotel in Dhampus, have lunch. After lunch, you can either explore the village or choose to relax and enjoy the view of the Himalayas from the hotel.

The following day, wake up early to watch the sunrise; you can witness the sunrise from anywhere in Dhampus Village. After breakfast, start your day by heading towards Australian Camp. It is a comparatively easier climb than from Phedi to Dhampus. The Australian Camp, locally known as “Thhulo Kharka,” is situated 1890 m above sea level. During the early days when the trekking route for Annapurna was opened to trekkers, many people camped here before heading towards the Annapurna Base Camp. Many Australian trekkers would set up a camp on this high grassland, which eventually got named the Australian Camp. You can enjoy the seasonal flowers on this route. You can see the spectacular view of the Himalayas ranging from Annapurna South to Lamjung Himal and Manaslu to the north and also a fascinating city view of Pokhara and Phewa Lake on the south.

You can either choose to spend a night here or trek down to Kande through forests and small villages. The downhill trek from Australian Camp to Kande takes anywhere between 90 minutes and 3 hours depending on your fitness. This short yet mesmerizing trek is overall easy to moderate level of difficulty and can be enjoyed by people of different ages and endurances.

A Few Things to Know Before You Plan Your Trek

• The trek is not accessible if in a wheelchair

• The trek is accessible if on a stroller

• Not recommended for travellers with back problems

• Not recommended for pregnant travellers

• Most travellers can participate

The Dhampus trek is suitable for those who are on a short vacation in Nepal but still want to gather some hiking experience. It is also a great family trek and even suitable for children and elderly people

Best Time to Go on the Dhampus Trek

February to May during spring and September to December during autumn are the best times of the year for trekking to Dhampus.