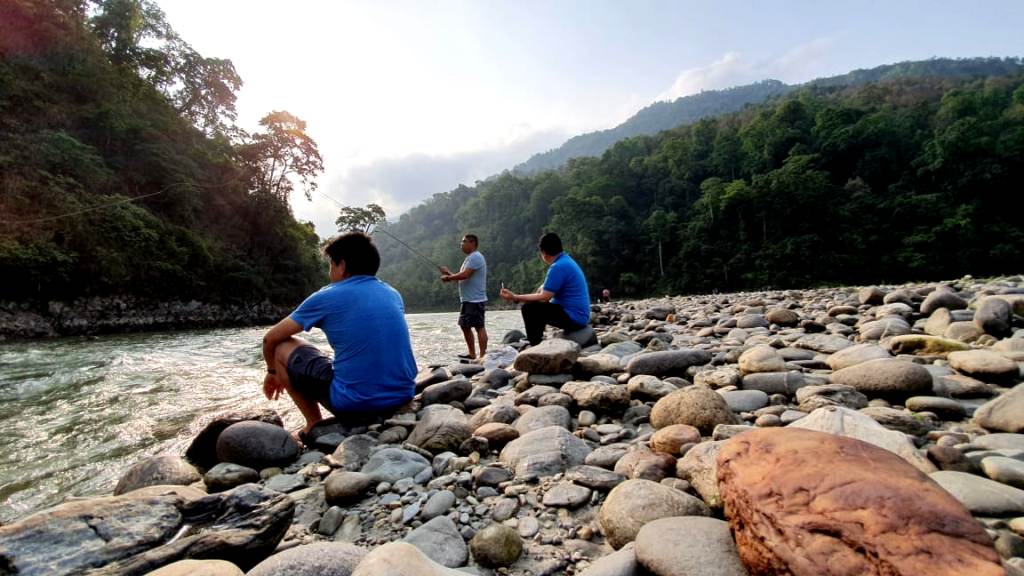 Catch and release: Angling in Tribeni

Whenever my friends and I plan a trip, it never materialises. No matter how many discussions we have around countless drinking episodes, nothing works better for us than to “go with the flow.” So, without a plan in sight, we took off from Gangtok on a late evening towards Tribeni, the spot where you can see the confluence of the revered Teesta and Rangit, the two major rivers in this part of India. The idea was to spend a lazy weekend alongside the river, cut off from the modern world, doing and thinking absolutely nothing—every man’s dream right! It was nightfall by the time we reached there, and we quickly got into action: pitching the tent; arranging for firewood, water, and food; the whole nine yards. Before we could settle down, it started to rain, but we were not deterred as we wanted to “feel one with nature,” so we hurriedly pitched the tent and poured ourselves some drinks (which is customary and mandatory) while waiting for the rain to stop. Once the rain stopped, we got our show on the road: first thing first, we started a fire, then heated a rock and started cooking. A word of caution: wash the rock properly else you will have some crunchy bacon to chew on, which is not really a bad thing after a few drinks down.

Afterwards, we started angling. At first, in the dead of the night, the place seems pretty isolated, but if you look closely there are many angling enthusiasts around and some just looking to make some money selling the fish that are quietly perched on the side of the river or knee deep in the water. This is a regular feature during the fishing season. The anglers are hobbyists who follow a strict “Catch and Release” motto, whereas the others look at it as a source of income. This went on till the wee hours of the morning until we finally decided to catch some sleep. However, sleep eluded us as the summer heat and humidity seeped into our tent making it hard to catch any respite.

Since the day would get even hotter if we stayed over, we packed our tent and left in search of some cooler place.