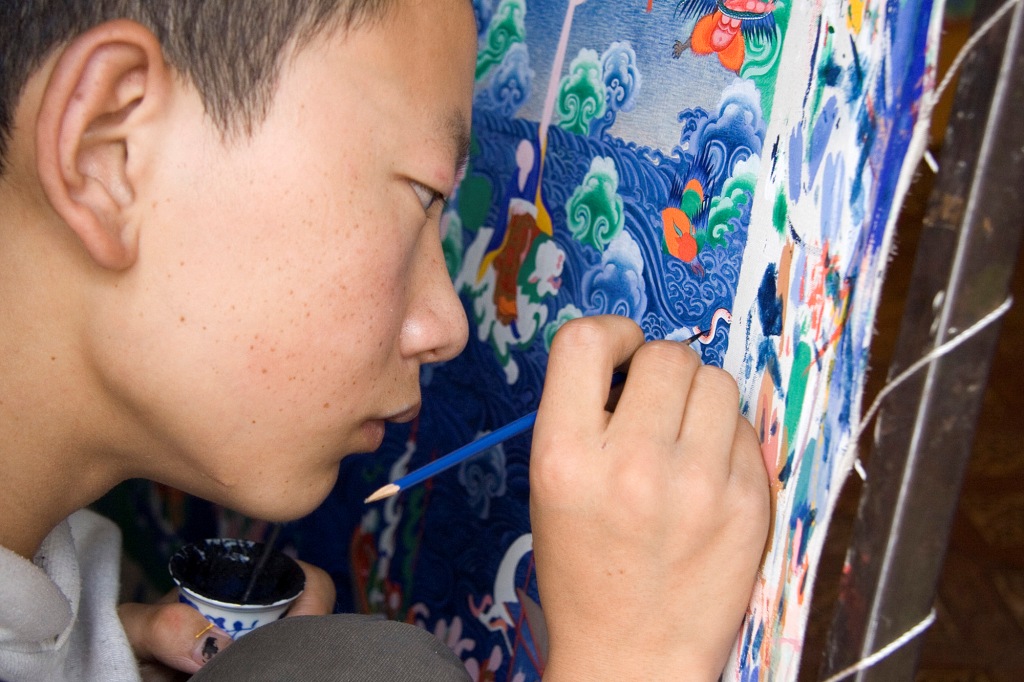 Blending the ancient and modern thangka painting in Bhutan

A thangka (spelt as thangka, tangka, thanka or tanka), is a Tibetan Buddhist painting on cotton or silk materials, usually depicting a Buddhist deity, scene, or mandala. Thangkas are customarily kept unframed and rolled up when not on display, riding on a textile support slightly in the style of Chinese scroll paintings, with a further silk cover on the front. When preserved, thangkas can last a long time, but because of their delicate nature, they have to be kept in dry places where moisture will not affect the quality of the silk. Most thangkas are moderately small, similar in size to a Western half-length portrait, but some are tremendously huge, which were designed to be displayed, typically for very brief periods on a monastery wall, as part of religious festivals. Most thangkas were intended for personal meditation or educating the monastic students. They often have elaborate compositions including many very small figures. A chief deity is often surrounded by other recognised figures in a symmetrical composition.

Thangka serve as important teaching tools describing the life of the Buddha, countless influential lamas and other deities and bodhisattvas. One subject is The Wheel of Life (Bhavachakra), which is a visual depiction of the Abhidharma teachings (Art of Enlightenment). Today published imitations at poster size of painted thangka are commonly used for religious as well as decorative purposes. Thangka perform several different functions. Images of deities can be used as teaching tools when depicting the life (or lives) of the Buddha, describing historic events about important Lamas, or retelling mythologies associated with other deities. Devotional images act as the centerpiece during a ritual or ceremony and are often used as mediums through which one can offer prayers or make requests.

Tibetan Buddhist painting established from widespread traditions of early Buddhist paintings which at present day only survive in a few sites such as the Ajanta Caves in India and the Mogao Caves on the Silk Road, which has very extensive wall-paintings and was the storehouse for what are now the initial alive Tibetan paintings on cloth. The thanka form advanced together with the tradition of Tibetan Buddhist wall paintings.

The early history of the Thangka is more effortlessly traced through these murals, which survive in greater numbers than the portable paintings which definitely existed at one time. Most thanka were custom-built by individuals, who were believed to obtain distinction by doing so. They might then be given to a monastery or another individual, or retained for use by the commissioner. Some thangka have writings on their back recording that they were the personal meditation image (thugs dam) of a distinguished monk. Most artists were probably monks, although amateur artists seem to have existed, as they did for metalwork sculpture. The commissioner would provide the materials, which were often valuable, and by tradition the payment to the artist was regarded as a "gift" rather than a fee. The word "thangka" means "thing that one unrolls" in Classical Tibetan. Thangka are very rarely signed, but some artists are known, more because they were significant monastic leaders than famous as artists. Painting was an appreciated achievement in a monk.