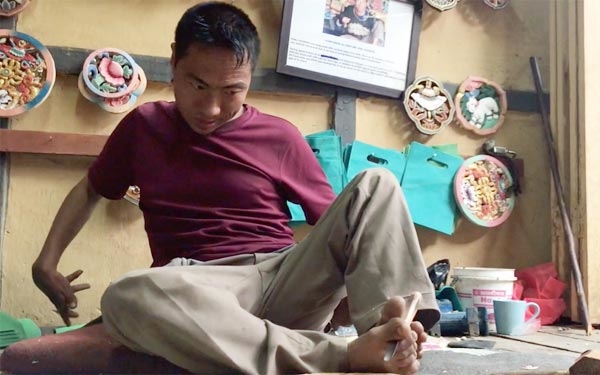 Where there’s a will, there’s a way. That phrase might be old and overused, but that’s the best way to describe a very talented and inspiring man from Bhutan.

Meet Pema Tshering, a talented artist from Bhutan with cerebral palsy who uses only his feet to create stunning wood carvings and paintings in Bhutan. He was abandoned by his parents at the time when he was just a child of six years. Pema Tshering does not reveal much about his early life except that he was born in Mongar district of  Bhutan where his parents were farmers. However, he does not hold any grudges and with time, he now funds them with his success.

Some of Pema Tshering's creative works

Pema Tshering was diagnosed with cerebral palsy when he was a child, but nothing could stop the resilient and dedicated artist Pema Tshering from being one of the most recognised painters and wood-carvers in Bhutan.

When he was 18 years old, Pema Tshering had a chance meeting with Her Majesty the Queen Mother Tshering Pem Wangchuk of Bhutan who was visiting his village at the time. Unlike his parents, the Queen Mother of Bhutan did not turn her back on him but instead gave him the love and support he needed.

In a matter of time, the Queen Mother of Bhutan then subsequently sponsored Pema Tshering at an art school called the Institute of Zorig Chusum in Thimphu, Bhutan, where he further refined his skills and artistic abilities.

Pema Tshering holds a chisel and hammer using only his feet, nimbly carving his way through a piece of wood as he narrates his story about being abandoned by his parents at a very young age, encountering the Queen Mother of Bhutan who subsequently adopted him, and how he eventually became the inspiring artist from Bhutan as we know him today.

Paralysed from the hip up, the 31-year-old artist Pema Tshering has lived almost his entire life using his feet as his hands. Despite his handicap, Pema Tshering has managed to eke out a living at a small shop set up inside the compounds of Simply Bhutan museum in Thimphu, the capital city of Bhutan which was set up by the Queen Mother of Bhutan where he sells his art.

His endurance, resilience, and strength despite his physical and emotional challenges and in the face of adversity is a testament to the human spirit, and his story deserves to be told to the world. Local drinks of Sikkim
ALL BLOGS