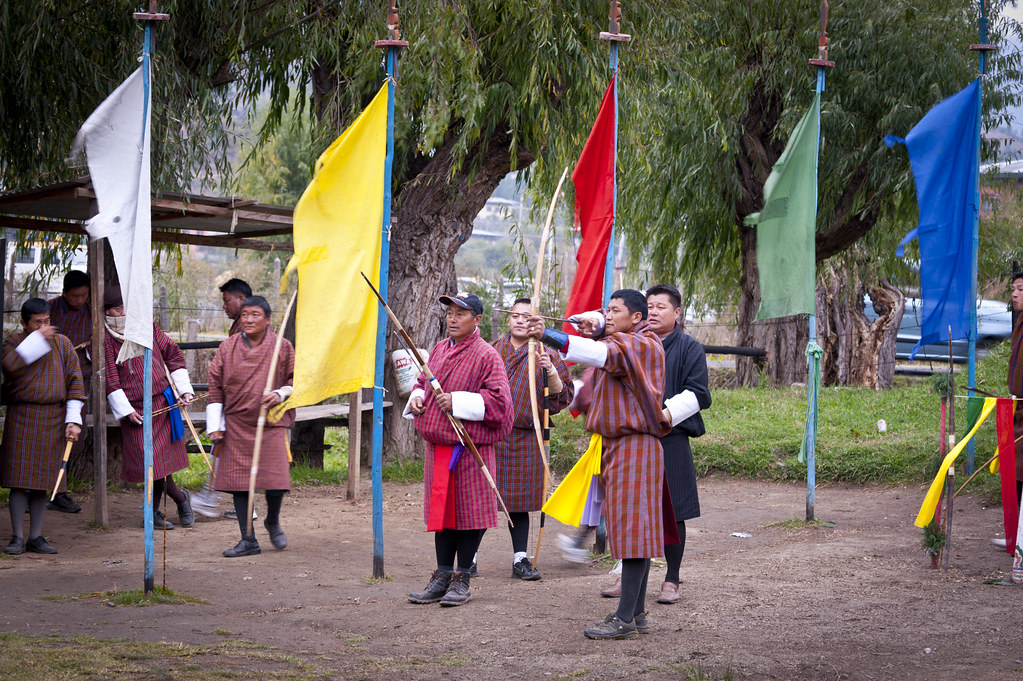 URL copied.
Cancel
Archery in Bhutan is the national sport of the Kingdom. Archery was acknowledged the national sport in 1971, when Bhutan became affiliate of the United Nations. Since then, the reputation of Bhutanese archery has increased both inside and outside Bhutan, with a measure of government promotion. Bhutan also upholds an Olympic archery team. Earlier, competitions were held only at dzongkhag and gewog levels, currently, archery tournaments and competitions are held all over the country. Archery is played during spiritual and secular public holidays in Bhutan, local festivals (tsechu), among public ministries and departments, and amid the dzonkhag and the regional teams. Archery tournaments and performances have also become a significant point of interest for tourism in Bhutan.
Archery in Bhutan is traditionally distinctive because it is a martial art practiced among a modern population that abhors killing. Bhutanese people from diverse social strata find archery one of the most pleasant sports, being both fun and physical exercise. In addition, archery builds concentration, which contributes to mental development; according to a Bhutanese proverb, both sailing and archery require intelligence. Archery in Bhutan is a way of socialization, communication, and development of relations between people. Emotions run high during competitions, and support for archers and ridicule or distraction of opponents can become as violent as in other countries' sporting events
Every village in Bhutan has a field for archery; Changlimithang Stadium in Thimphu is one of the kingdom's most prominent archery fields. The most notable archery competition in Bhutan are Coronation National Archery tournament and Yangphel tournament. Other major archery competitions are held during Losar, the Bhutanese and Tibetan New Year.
The distance to the target is about 145 metres (476 ft). The relatively small targets are cut from wood and brightly painted, usually measuring about 3 feet (91 cm) tall and 11 inches (28 cm) wide. Bullseyes are called karay. Traditionally, Bhutanese bows are made of bamboo, and arrows from bamboo or reeds, fletched with feather vanes. Arrows may be painted and tipped with metal arrowheads. Quivers may be made of wood, with an animal skin casing and a plaited leash.
Bhutanese archery teams number at 13 players; teams take turns shooting two arrows at a time initially in one direction, then in the opposite direction. The first to score 25 points wins, however because the scoring system is complex, winning can take a very long time. For example, a second hit by an opponent can nullify the other player's score. In addition, the back-and-forth socializing and festivities, with archery is the nominal focus, gives Bhutanese archery competitions an awfully slow pace. In the past, the maximum traditional matches could last for as long as a month, though modern matches tend to span a number of days.
Arrangements for archery matches in Bhutan are dissimilar from other sports: competitors are advised not to spend the night with their wives the night before the competition in order to achieve a high level of concentration. On the eve of a competition, the team spends the night in the woods or in a barn. Opening events lead the beginning and breakfast, and alcoholic beverages can be consumed on the morning of competitions. Teams often hire astrologers to select rival members. In their predictions, astrologers use puppets to represent archers, puppets of fate who have no control of their purpose. These Bhutanese astrologers are often hired at substantial fees in archers' attempts to have favorable performances, cast curses against other archers, and gain an upper hand. Astrologers also estimate the time and place for competition.
Modern archery competitions in Bhutan feature complex bows, business sponsorships, abundant cash and material winnings, injuries, and occasional fatalities. The popularity of archery has raised questions of Bhutan's vulnerability to doping, including by alcohol, in the sport. The amplified current popularity of archery has also drawn attention to the danger in the sport, especially to spectators, residents, and passersby near archery ranges. Since 2010, Bhutan has held the Lyonchen Jigmi Y Thinley Archery Tournament, encouraging the use of traditional bows and the development of gewog teams.