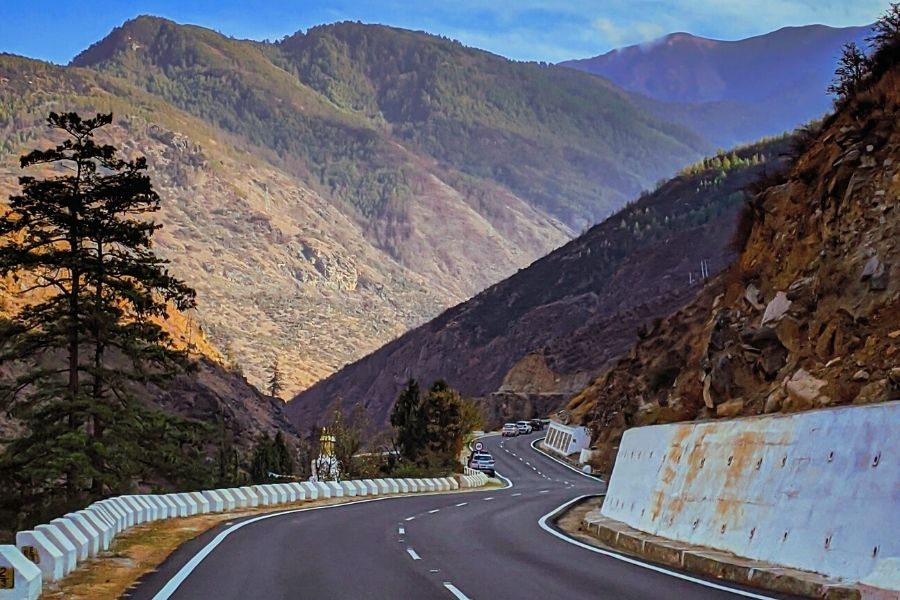 Bhutan Diaries: An Epic Road Trip From Siliguri To Thimphu

It is almost impossible to find a travel enthusiast who does not get excited by the idea of a road trip. Well, for me, even imagining a road trip gives me goosebumps. While almost the entire year has now gone by, sitting at home and not being able to spend time outdoors, I find it extremely comforting to look through older travel pictures once in a while and reminisce about the good times by clinging onto a path intertwined with memory and nostalgia.

It was on one such day when I decided to dig through the archives, I stumbled upon pictures from my Bhutan trip. I went on this road trip about two years ago, but memories still remain fresh and vivid. Back in November 2018, while I had confined myself at home without having anything substantial to do, the idea emerged out of nowhere to travel to Bhutan – The land of Thunder Dragons! With no further deliberation, I did some quick research and finalised on the trip. A week after the idea had struck me, I commenced on the journey without any expectations, and the trip turned out to be much-needed emancipation from the cycle of a mundane lifestyle.

Driving through the beautiful roads of Bhutan

The much-awaited day arrived and I left my hometown Siliguri, with my parents and a friend – the quirkiest travel group one can think of. The drive to Phuentsholing, the border town of Bhutan, was a really smooth one. We drove past the very famous Coronation Bridge, winding mountain roads along the Teesta River, and wildlife sanctuaries like Chapramari Forest. It took us about 4.5 hours, with a couple of breaks in between, to make it to Phuentsholing by noon. For those of you who have already visited Bhutan, you would know how the setting of the town and surroundings change drastically just as you cross the borders. Just as we left the Indian lands and entered Bhutan, we were welcomed with surprisingly clean streets, roads with much lesser vehicles, and a lot of happiness.

The first thing I wanted to sort out was the entry permits for us as well as our car. Please note that before the SDF (Sustainable Development Fee) was implemented on the citizens of India, Maldives, and Bangladesh, Indian nationals could travel to Bhutan in their own vehicles and drive with a valid Indian license. But now that the SDF has come into the picture, clearer notifications are awaited on whether vehicles from India will be allowed or not. So back in 2018, all we were required to do was to get ourselves an entry permit from the immigration office and a separate permit for our car. It took us about 2 hours to acquire them after which we headed to our accommodation, a serviced apartment that I had booked in the heart of Phuentsholing city. After dropping our luggage, we spent the evening strolling through the streets of Phuentsholing and relished on a delicious dinner at Zen Restaurant. As we did not want to do too many things that day, we chose to spend a laid back evening chilling at the apartment. But if you wish to explore the town, you can head over to Karbandi Monastery, Zangtopelri Temple, or the Crocodile Zoo: few of the remarkable places in Phuentsholing.

On our second day, we started off by 8 am. It took us 7 hours to cover the 150 km to reach Thimphu. We drove through scenic roads, dreamy landscapes, and meandering roads filled with clouds. It usually takes less than 7 hours to cover the distance, but we could not resist taking multiple halts considering how stunning the sceneries were. We travelled slow and soaked in the freshness of the unadulterated nature. I was aware of the strict “no honk” rule of Bhutan, but what amazed me was the fact that there were no traffic signals in Thimphu. The policemen used the traditional method of making signals with hand movements, which makes Thimphu the only capital city in the whole world to run smoothly without traffic lights. After freshening up, we set out to explore the nearby areas on foot. As we walked, we found a cosy cafe across the street and spent the evening there.  The Buddha Dordenma was clearly visible from our balcony, and as it lit up against the starry skies, it radiated an enchanting vibe. We called it a night early that day.

Scenic landscapes along the Phuentsholing-Thimphu Highway

Places we visited in Thimphu

Thimphu, though well developed, is not like any other city we see in India or in other countries. As it is an earthquake-prone zone, buildings are only allowed to be built till the 5th floor. Thimphu has a very distinct charm of its own with a blend of history, culture, and spirituality. The ancient traditions and values are revered and upheld by each and every citizen to date. With picturesque landscapes, vast valleys, mighty Dzongs, and spiritual & cultural centers, there is no end to the list of things to do in Thimphu.

A view of Thimphu City

We spent the next two days visiting all the major places in Thimphu, which I am listing below for a ready reference if you happen to be there in the future.

Situated at an elevation of 300 ft above the city of Thimphu, Buddha Dordenma, more commonly known as Buddha Point, is one of the most visited places in Thimphu. The 169 ft tall statue of Shakyamuni Buddha, made of sparkling bronze, is perched on a hilltop overlooking the Thimphu Valley. Interestingly, there are 1,25,000 miniature statues of Buddha inside the meditation hall below the huge Buddha statue. It took us more than an hour to explore this place and observe the intricate designs and paintings on the walls of the meditation hall, which shows the major events from the life of Buddha.

Built in the 12th century, Changangkha Lhakhang is the oldest temple in Thimphu. The temple is located on a hilltop in Thimphu and shelters a figurine of Chenrizig with eleven heads and a thousand arms. This place is believed to be a spiritual home for children who are brought here to receive special blessings from the protector deity Tamdrin. We sat by the courtyard in Changangkha Lhakhang and watched the monks and the locals chant prayers and rotate the prayer wheels.

In Bhutanese language, dzong refers to a fortress. Tashichho Dzong serves as the chief administrative building in Thimphu, housing the throne room and offices of the king, the secretariat, and ministries of home and finance. It is also the headquarters for the central monastic body of Bhutan. The iconic building, built in the traditional style, is surrounded by beautiful lawns and gardens. The area is a high-security zone, and tourists are to go through scanning and special security checks to enter the premises.

The iconic building of Tashichho Dzong

Set atop a hill, Semtokha Dzong is a 16th-century fortress, located 5 km from away from Thimphu city. According to legend, a demon vanished into a rock in this spot and used to harass the travelers. It was then that the Dzong was built to subdue the demon. It was the first dzong to have started functioning as an administrative as well as a spiritual centre. Semtokha Dzong houses many ancient carvings, paintings, and statues of various deities including the eight manifestations of Guru Rimpoche. Visit this place to encounter the rich history of Bhutan.

Established in 2001, the National Folk Heritage Museum is the most recent addition to the list of places to visit in Thimphu. It is not a typical sightseeing spot but an educative museum where you can gain insights into the Bhutanese lifestyle. The museum is set in a 19th-century traditional Bhutanese house where demonstrations are organized regularly for visitors to get a first-hand experience of the traditions and cultures. If you can plan beforehand, do try the buffet lunch or dinner, which is organized in this museum for groups of a minimum of five members or more to savour delicious traditional meals.

Shop till you drop

We visited the Norzin Lam Market to shop and collect souvenirs. As we visited Thimphu on a weekend, the vibe of the market was out of the world. There are a variety of options to choose from and buy, like, handicrafts, traditional paintings, textiles, bags, postcards, religious items, and many more. We mostly shopped with Indian currency as it was widely accepted throughout Thimphu.