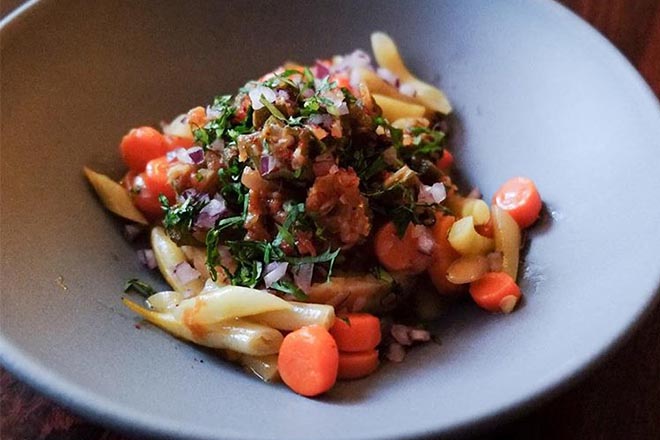 Bhaji: A favourite snack of Assam

Bhaji: A favourite snack of Assam

A bhaji, bhajji, bhajiya, or bajji is a popular spicy snack or entree dish and is similar to a fritter. Koldil Bhaji is one the favourite traditional snacks of Assam. The typical way to prepare this snack is with fresh banana flowers, potatoes, crushed cardamom, and pure ghee. The species used to make this snack are locally grown and add a unique flavour to it. In an Assamese household, Koldi bhaji is served as a side dish with paranthas.

Bhajis are also part of the traditional cuisines of Gujarat, Maharashtra, Tamil Nadu, and Andhra Pradesh and are served on really special occasions and at festivals.

In Maharashtra this snack is called vada. In south India it’s called bonda. Bonda has potato or mixed vegetable filling. In Gujarat it goes by the name of Gota. Gota is made using green fenugreek leaves. Variations of bhaji include the chili bhaji, potato bhaji, and the bread bhaji (or bread pakoda). Outside these states, bhaji is called pakora. Onion bhajis are often eaten as a starter snack in Indian restaurants before the main course, along with another popular snack called poppadoms.

In Assam, bajis are generally served with a cup of coffee, tea, or a traditional serving of yameen. This snack can also be served with a side of salad and slice of lemon, or with mango chutney, and is traditionally made to a mild taste.