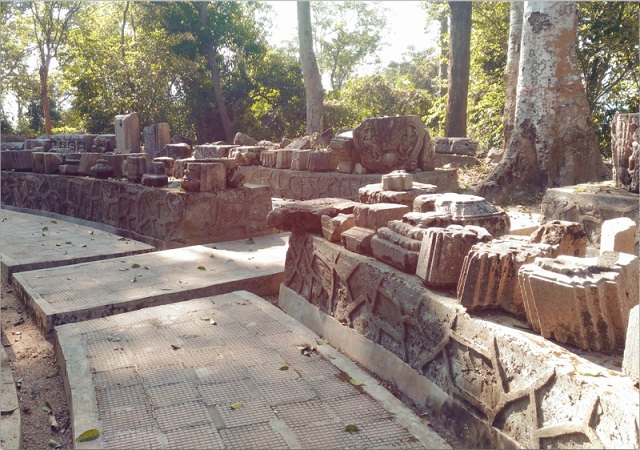 URL copied.
Cancel
Monuments of Assam
Assam is known for its natural beauty, but it also has a rich historical background that goes back to centuries. For a tourist interested in history, Assam has a long list of monuments that are unique.
The best of Ahom architecture is exemplified in the 18th century old monument called Rangghar, which is located at Sivasagar town The octagonal, 2-storey structure stands on exotic materials such as snail ooze, long fish bones, jaggery, black gram, elephant grass, limestone, filtered lime powder, mustard oil, incense, along with bricks and big stones. Rangghar was used during sporting events, when members of the royalty would sit on the upper floor to watch buffalo and elephant fights, duels, and sporting events while commoners enjoyed them sitting on earthen mounds that surrounded Rangghar.
The amphitheater is close to Talatal Ghar or underground palace, the largest of the Ahom monuments. The irregularly shaped palace had 7 storeys. Three of them are underground and comprise 2 secret tunnels (one of them is 16 km long). These tunnels were used as escape routes during enemy attacks. The underground chambers are now sealed and no longer accessible to the public but visitors can get a view the remnants of the upper storeys. Another multi-storeyed palace is the Kareng Ghar.
Other significant archaeological sites/tourist places to visit are:
Suryapahar monument
Located 136 km west of Guwahati is a unique archaeological site on a hillock sporting Hindu, Buddhist and Jain relics together. You can find hundreds of ancient engraved Shiva lingas of various sizes, a series of Buddhist stupas, and sculptures associated with Jainism at the site. Findings of remnants of planned houses and artistic bricks at Suryapahar confirm that a civilization once thrived here centuries ago.
Deoparbat monument
Deoparbat is a hillock located close to Kaziranga National Park. It houses stone ruins and carvings of temples from the 8th and 9th centuries.  A major earthquake in 1897 destroyed the main Shiva temple situated here. Deoparbat adjoins the Deopahar Reserve Forest and is close to Garampani Wildlife Sanctuary, which is home to hoolock gibbons and golden langurs.
Dah Parbatia
Dah Parbatia is a 4th century temple displaying the oldest specimen of sculptural and iconoclastic art of Assam. The only thing that remains of this site is a rectangular stone doorway adorned with carvings of Hindu deities.
Madan Kamdev monument
The ruins of Madan Kamdev are located over a hillock and date back to the 9th and 10th centuries. Remnants of 12 temples were discovered here 35 years ago. Apart from Hindu deities, the ruins have erotic sculptures akin to Khajuraho in central India’s Madhya Pradesh state.
Ambari excavations
Located in the heart of Guwahati, close to the Dighalipukhuri tank, Ambari straddles two distinct cultural periods ranging from 7-12th AD and 13-17th AD. A ceramic industry dominated by kaolin ware, red ware and buff ware has been unearthed here. What’s interesting is that Chinese celadon ware and green glazed ware have also been found in the excavation.
Moidams
The moidams are pyramid-like burial mounds of members of the Ahom royalty. The best known are some 40 tombs at Charaideo, 30 km from Sivasagar town, which was the first capital of the Ahoms after Sukaphaa (1228-1268) established his kingdom there. At Holongapar, 16 km from Jorhat, is Lachit Moidam that preserves the remains of Lachit Barphukan (1622-72), the great Ahom general who defeated the Mughal forces in the Battle of Saraighat in 1671. In the heart of Jorhat are Raja Moidam, the tomb of King Purandar Singha, and Purnananda Buragohain Moidam, the tomb of a general near Tocklai.
Photo credit: Omer Marcel and Travelling slacker