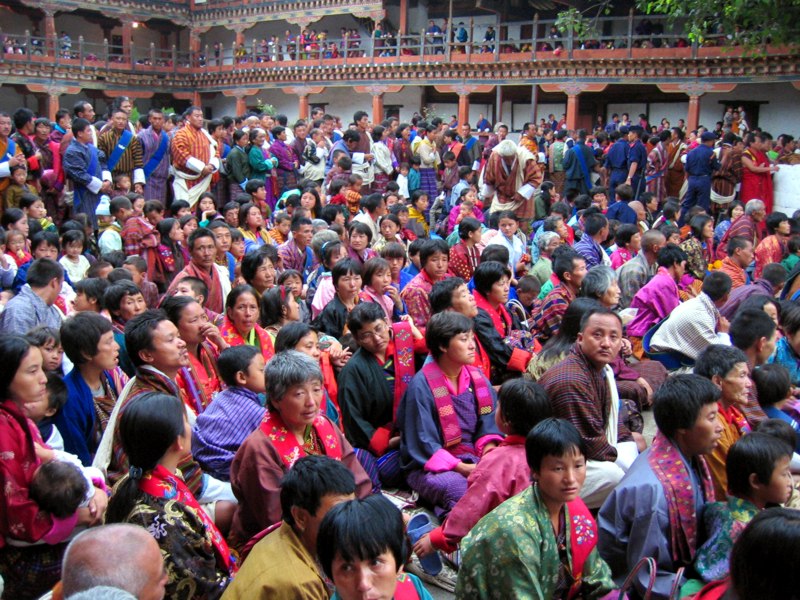 URL copied.
Cancel
Bhutan has been home to many sages and saints over the centuries since Guru Rinpoche brought Buddhism to Bhutan in the 8th century. Kuenkhen Longchen Ramjam, Phajo Drukgom Zhigpo, Pema Lingpa, Drukpa Kuenley, Zhabdrung Ngawang Namgyal and Gyalse Tenzin Rabgye are some of the key figures of Bhutanese Buddhism.
Bhutanese women create 49.5 percent of the country's overall population and play a key role in the development of the country. They are actively involved in all areas of economic, political and social life as farmers, entrepreneurs, decision-makers, doctors, engineers and homemakers. Bhutanese women do not face any institutionalized form of discrimination- politically, socially, economically or legally. Law treats women and men equally and many of its provisions protect the rights and interests of women and children.
There is equal participation of women and men in decision-making in Bhutan, such as at community meetings, but at the grass roots level female involvement is as high as 70 percent. Contribution of women in district and block development council is also being actively promoted and is increasing. Positions in the higher levels of Bhutan government and decision-making, in which women are not yet adequately represented, are open to both genders and placement of women in the higher strata of government is being encouraged.
In the field of Bhutan education the enrolment of girls in the primary level at 46 percent in 2000 is one of the highest in the SAARC region as well as in the developing countries. Maternal and child health too has been accorded high priority by the government. Effective service delivery and aggressive advocacy campaign in areas of safe motherhood, concept of small family, women empowerment, adolescent reproductive health and prevention of STD/HIV diseases have also attributed to the general improvement of health of women and children.
There is no significant preference for the male child over the female among most sections of the population and sex-biased abortions are unknown among the Bhutanese. In traditional society, most of which is matriarchal, women were expected to hold the house and landed property while sons would leave home and settle in their wives' house. This custom is based on the belief that women need economic security to enable them to take care of their parents and raise children. This has led to the customary rights of importance by daughters. It is estimated that almost half of land-registered titles, which is an index of property distribution, are recorded in favour of women. According to a gender pilot study conducted in 2001, in rural areas, 60 percent of the landowners are women and in urban areas, building and business licenses was registered in favour of women.