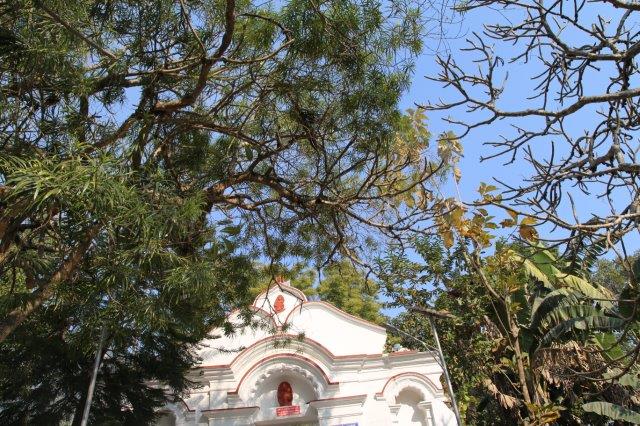 All you need to know about Umananda temple in Assam

Umananda Devaloi is a Shiva mandir which is located at the Peacock Island in the middle of river Brahmaputra in Assam. The Peacock Island is the smallest inhabited river island in the world. It lies just opposite to the office of the Deputy Commissioner of Kamrup or the Kachari Ghat in Guwahati, Assam, India. It was built by the Ahom King Gadadhar Singha (1681–1696), who was a devout Shaivaite.

The mandir of Umananda was built in 1694 A.D. at the Peacock Island in Assam by the Bar Phukan Garhganya Handique along the orders of King Gadadhar Singha (1681–1696), one of the ablest and strongest rulers of the Ahom dynasty in Assam. The original Umananda mandir was however greatly damaged by a devastating earthquake of 1897 in Assam. Later, the Umananda mandir was reconstructed by a rich local merchant who chose to inscribe the interior part of a Shiva mandir with Vaisnavite slogans.

During the short period of the Mughal occupation of Kamrupa, land, men and money were gifted to the priests of the mandirs of Umananda from the Mughal Emperors Jahangir and Aurangzeb. The mandir has inherited some rock-cut figures, which speak passionately of the masterly skill of the Assamese craftsmen. The sculptures at this mandir show that the worshippers there followed all the principal Hindu gods. Representations of Surya, Ganesha, Shiva and Devi (with a scorpion as an  emblem) in addition to those of Visnu and his ten incarnations (or avatars) are found at the mandir of Umananda. The main shrine of Umananda mandir is reached by walking up a flight of steep steps.

Legend has it that Shiva is said to have resided here in the form of Bhayananda. According to the Kalika Purana, at the very beginning of all creation Shiva sprinkled ashes (bhasma) at this place and imparted knowledge to Parvati (his consort). It is said that, when Shiva was in meditation on this hillock, Kamadeva interrupted his yoga and was therefore burnt to ashes by the fire of Shiva’s anger and hence the hillock got the name Bhasmacala.

This mountain is also called Bhasmakuta. The Kalika Purana states that Urvasikunda is situated here and here resides the goddess Urvasi who brings Amrit (nectar) for the enjoyment of Kamakhya and hence the island got the name Urvasi Island.