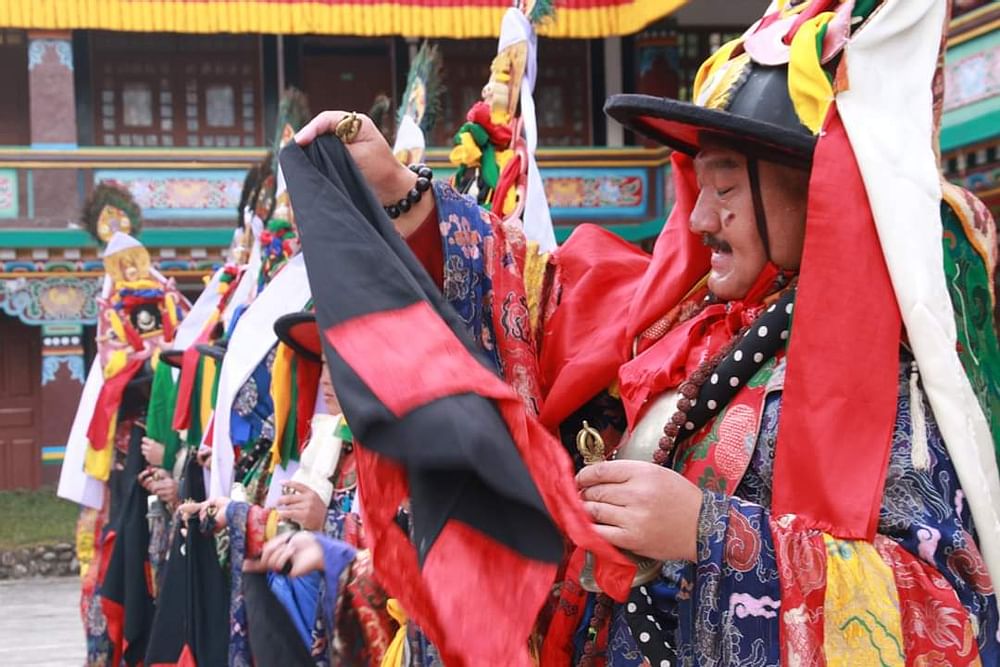 All you need to know about Losoong: The Sikkimese New Year

The Indian calendar is replete with numerous fairs and festivals. The festivals in India are categorized into two: those celebrated by the whole of India and those specific to particular regions. Losoong is one of Sikkim’s grand festivals. For visitors and travellers seeking a rendezvous with the unique Sikkimese culture, Losoong undoubtedly makes for a great retreat offering them an unmatched spectacle of traditional folk dances, religious rituals and ceremonies, and ofcourse a lifetime opportunity to gorge on the delicious Sikkimese cuisine. In fact, it won’t be incorrect to say that today Losoong has gained a reputation of being one of the most valued festival tours in Northeast India, and attracts a footfall of thousands of tourists from across the globe every year. Sikkim, as a vacation destination, is quite scenic and a gem that must be explored. Interesting and thrilling travel getaways like Yuksom and Tashiding Monastery give you a glimpse of their culture, but if you really want to witness their traditions in full glory then you ought to come during the Losoong Festival.

One of the most anticipated festivals of Sikkim, Losoong is celebrated as per the Tibetan Lunar Calendar. It falls on the 18th day of the 10th month of every year, and the festivities continue for 5 days. It is usually a time when the farmers rejoice and celebrate their harvest. This is the time that marks the end of harvesting season of the year. The farmers have worked hard and now they spend a few days of leisure and merry making. The excitement of these few days is what keeps them motivated through the hardships throughout the year.

Losoong is celebrated not just in India but in the neighbouring countries of Nepal and Bhutan too. The dances performed during this festival showcase the narrative tales from the life of the great saint Padmasambhava.

Celebrations
Although the festival is celebrated privately among family members and friends, there is an air of festivity all around these hills. The Losoong Festival is inspired or rather adapted from the traditions and rituals of the Tibetan New Year, Losar. The black hat dance takes place at this festival commemorating the victory of good over evil, with ‘chaams’ (masked dances) held in many monasteries 2 days prior to Losoong.
The ‘Chaam’ dance is a colourful and lively dance, which is a major part of Tibetan festivals and Buddhist festivals. The traditional ‘chaam’ dance takes place where the monks (only they are allowed to perform) dress up as divinities and perform the dance while playing music using their traditional instruments.

Cham dance symbolises an offering to the gods. The dance not only reflects the festive mood but welcomes the new harvest season. The core concept of the cham dance is the depiction of moral instructions. Dancers dress up as mystical figures as well as godly personalities. The dance is a way to exorcise the evil spirits and welcome the good spirit of Sikkim for the upcoming year. These are mainly performed to welcome the New Year on a happy and positive note, and whoever witnesses the dance is bestowed with a lot of blessings, good health, and wealth. The biggest dance events take place in big monasteries in Sikkim like Tsuklakhang Palace and Rumtek Monastery. The monks also take part in traditional dancing and singing events. What’s interesting is that the men who participate in it have to wear huge masks along with heavy traditional attires, making them look very attractive and fun. Certain competitions are also held in traditional skills, such as archery and bouts of merry making and can go on for days. If you wish to be a part of the celebrations, you can also take a sip of the local wine ‘chaang’ and get submerged in the festive mood.

The New Year’s celebration of the Losoong Festival begins after the priests offer ‘Chi-Fut’ to the gods. The Chi-Fut is a special kind of alcohol and is quite famous locally. The offering is followed by burning the effigy of the demon king. Burning the demon represents destroying the evil from the lives of the people.

Similar to most festivals in India, Losoong Festival is incomplete without special delicacies of the respective region. The sikkimese cook special food. The delicious local-made drinks are also a part of the festivities. Monasteries and homes are seen decorated in colourful flags as well as festoons. The bliss of white winters and the burst of colours make it a wonderful sight to witness.

How to Reach
Almost all the modes of transportations are available to visit Sikkim. In spite of being a hilly state, it is well connected by air, rail, and road.
By air: The Bagdogra International Airport is located at an approximate distance of around 150-160 km from the city center. From the airport, you can take a cab to reach your destination. Pakyong Airport is another option though unreliable. Do check before booking.
By Road: Planning a trip to Sikkim via road? Well, nothing can be better than this! For this, you will need to cover 127 km via NH10 from Darjeeling, from Bagdogra you will have to travel for 154 km via NH 10, and from Patna it’s 603 km via NH 27.
By Train: The closest railway station is in Siliguri, West Bengal. Here’s a list of the cities near Sikkim and the trains you can catch from there.
1. Delhi - Arunachal Express from Anand Vihar Terminus
2. Kolkata - Shatabdi Express from Howrah Junction
3. Darjeeling - DJ NJP Passenger
4. Patna - DBRT Rajdhani from Danapur
Once you deboard the train, you will have to cover the remaining distance by some means of public transportation like a taxi or bus to Gangtok.
Sikkim Tour Packages