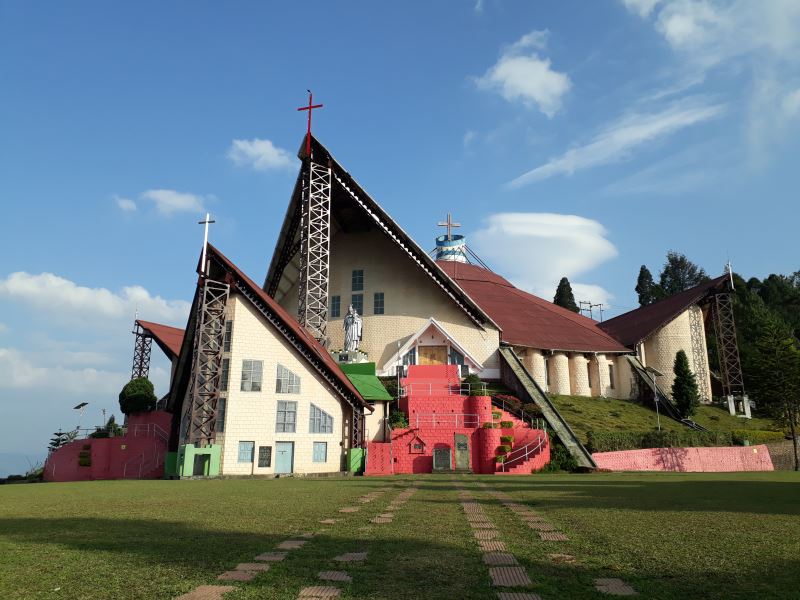 A day in my life in Kohima

It had been a while, perhaps two years or three after my last visit to Kohima. The last time I remember visiting was in the year 2012 when I hiked to Dzukou Valley with three of my class buddies. Ah! That hike was a memorable one.

So on my recent trip to Nagaland, I booked a ticket N.S.T (Nagaland State Transport) from Dimapur to Kohima. This was my first ever solo trip on a bus and I was super excited—God knows for what reasons because the roads were pretty trippy. After hours of journeying through hairpin turns; bumpy, gravelled road; and unpredictable rains, I arrived at Kohima. I stayed at my aunt’s home, which sat on the edge of a mountain supported by other buildings, which were also supported by others. I mean, this is the true beauty of a hill city right? The open windows overlooked the valleys, distant mountains, neighbours’ backyards, and clouds rolling down the peaks.

The next day I woke up to low-tone chatter below the guest room. I met my relatives fully wrapped in a beautiful knitted shawl. It felt great entering the warm kitchen away from the cold morning wind. While sipping tea, I walked outside anxiously waited for my cousin brother to return from his badminton practice because the night before we had planned to explore the city. I impatiently tuned in to my playlist on SoundCloud as I lay on the bed all curled up wearing woolen socks and a blanket that weighed more than me. In between thoughts, my cousin called out my name. I imagine the heavy blanket must have flown across the room as I hurriedly ran down with my bags. Finally, something great I can look forward to today, I thought.

First, we planned to hike to Puliebadze in Jotsoma, but I was completely disappointed when it started to rain. We quickly changed our plans and decided to visit a couple of other places instead. Within 2 minutes we jolted down all the possible attractions we could visit and finally decided on Kisama Heritage Village, Hope Garden, Dimori Cove, and Mary Help of Christians Cathedral. As we started to drive towards Kisama Heritage Village, it gave me a strange feeling of excitement. Although it was off-season for any exciting thing to happen, looking on the brighter side, I did manage to get uninterrupted pictures of the attractions that came my way.
Kisama Heritage Village is where the famous Hornbill Festival takes place. It also has an open arena where they’ve constructed traditional houses each representing different tribes of Nagaland. There was also an artificial tree with a number of Hornbill birds made of wood. But what intrigued me most was a small church located near the VIP parking lot—it had all the qualities of surrealism. There was a shop opened for visitors where light snacks and drinks were the only things we could buy. The shop also had Korean rice beer like the Makgeolli. We decided to climb the mountain until we reached the signboard “Naga Heritage Village.” As I gazed up the Japfu Mountain, the clouds began to thin out, letting in streaks of sunlight.
It was just what I needed—a supercalifragilisticexpialidocious moment all to myself. The steep narrow trails were slippery from the rain; some parts of the trail also had streams flowing down as if the trails were not meant for walking but for the water to flow. I took almost 20 minutes to reach the top from where the entire Heritage Village could be seen; a moment of silence and blissful atmosphere. Sitting on the edge of the viewpoint tower, I listened to the rumbling sounds of thunder, raindrops thumping on the grounds, and the rustle of leaves. "It's time to leave before it rains harder," my cousin said. As I turned around I gasped in awe. I was hooked to a narrow forested trail that almost disappeared into the forest.
The mysterious trail attracted me so much that I didn’t care if leeches sucked my blood or even a bison chased me. But quickly coming to reality, I nodded to my cousin and began to descend. We ran downhill slacking our pace at some points on the trail because the road was quite slippery. The race down took only 10 minutes or less. We took shelter in one of the traditional houses and waited for the rain to stop. It didn't take long for the rain stopped again, but we were both soaking wet. I couldn't even sit properly in the car. But hoping our clothes will dry on the way, we headed straight to Hope Garden, a solitary spot located near the Nagaland-Manipur border.
This was once a cemetery now surrounded by lush trees and flower garden with only a few tombstones. After exploring the enchanting forest/park, we drove to Kohima enroute Dimori Cove hotel. This place has a charming cafe and is located by national highway 2. This place was a delight as it had everything I was hoping for: wide windows, cosy sitting interiors, and small hut outside surrounded by plants. We sat outside overlooking Japfu mountain ranges. The sun made its appearance giving us enough time to lazily stay underneath the warmth and also dry our clothes. The coffee also worked wonders; it warmth my soul, just the remedy I needed after a cold day.
Just after entering Kohima, we drove to Mary Help of Christians Cathedral. A feeling of nostalgic overpowers me every time I come here. While I was a kid, there were a series of pine trees surrounding the church. Sadly, now, the trees are cut down. Sure, it provides an even better panoramic view of the city but nature and its rustic charm has long since gone. If you are a holy person or simply want to seek solitude, then come to this church. An empty church always makes me feel peaceful and calm.
Suggested read: Rediscovering myself in Nagaland
Check out some amazing Nagaland Tour Package