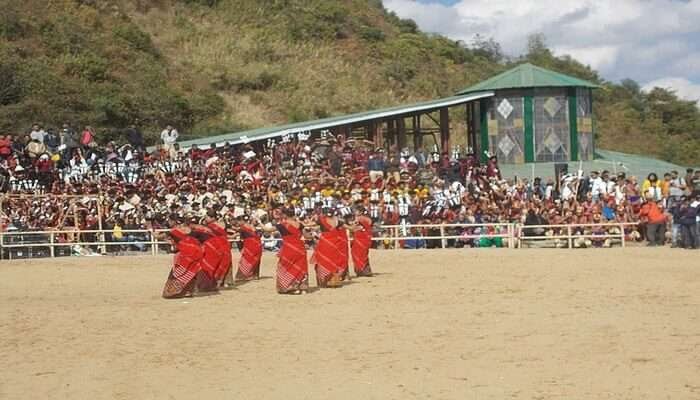 5 famous things of Nagaland everyone is gung ho about

URL copied.
Cancel
A land of utmost natural beauty with myriad tribes and enchanting landscapes, the northeast Indian state of Nagaland is often called “The Switzerland of the East.” It is one of the smallest states in India and is bordered by Arunachal Pradesh to the north, Assam to the west, Manipur to the south, and the Sagaing Region of Myanmar to the east.
Here’s a list of things Nagaland is famous for all over the country.
(1) The infamous Naga raja mircha/king chilli:
The food of Nagaland is known for its simplicity and spiciness. Nagas are known for their love of the king chilly, one of the hottest chilies in the world at a whopping 855,000 SHU on the Scoville scale.
Read: Mouthwatering dishes of Nagaland
(2) Astonishing scenic beauty
Nagaland’s striking mountains, magnificent waterfalls, rolling hills, and pristine lakes present postcard-perfect scenery that you will not easily witness anywhere else. Hence, trekking is a popular activity, which takes you through the most spectacular surroundings. The Dzukou Valley trek is on nearly everyone’s bucket list because of the visual treat the valley offers with its seasonal flowers, and unique flora and fauna.
Read: Dzükou Valley: Four souls one paradise (part i)
(3) Diverse tribes
Nagaland has 16 recognised tribes and a whopping 36 different languages spoken among them, making it perhaps the most vibrant of all the Indian states. Nagas belong to the Indo-Mongoloid group of people living in the contiguous areas of the North Eastern hills of India and the upper portion of Western Myanmar. The major-recognised tribes of Nagaland are Ao, Angami , Chang, Chakhesang, Khiamniungan, Kuki, Konyak, Lotha, Pochury, Phom, Rengma, Sumi, Sangtam, Yimchungru, and Zeliang. The Naga languages differ from tribe to tribe and sometimes even from one village to another.
Read: Tribes of Nagaland
(4) Festivals
With a whopping number of different tribes and the cultural diversity that they bring, there is little wonder in the fact that Nagaland is famously known as the “Land of Festivals.” With each tribe practising its own rituals and traditions, Nagaland is a state that has one major festival lined up for all months of a year. This fact is one of the key reasons for the state government to come up with the now-famous Hornbill Festival held in the month of December; it is believed to be an umbrella festival of sorts, bringing together all the tribes and their essence. Music and dances are an intrinsic part of Naga life. Hence, feasting, singing, dancing, and merrymaking invariably accompany festivals.
Read: Nagaland Echoes
(5) Handicrafts
The state’s craftsmanship is handed down from a long lineage of ancestors and is largely carried out even in today’s generation. Its unique designs and crafts are admired by even the other states of northeast India who are also known for their arts and crafts. Weaving is a traditional art, and each of the tribes has unique designs and colours when producing shawls, shoulder bags, decorative spears, table mats, wood carvings, and bamboo works. Among the tribes, the design of the shawl denotes the social status of the wearer. Some of the more known shawls include Tsungkotepsu and Rongsu of the Ao tribe; Sutam, Ethasu, and Longpensu of the Lothas; Supong of the Sangtams, Rongkhim and Tsungrem Khim of the Yimchungers; and the Angami Lohe shawls with thickly embroidered animal motifs.
Other lesser-known places and things you can do in Nagaland include:
Ancient ruins
Not known to many, Nagaland is also home to one of the most ancient ruin sites in the country. The Dimasa Kachari ruins in Dimapur date back to the 10th century and not much is known about their origin or purpose. The site is dotted with strange mushroom-domed pillars, and according to popular belief, it might be the site of a chess-like game. While the site is largely untouched and is facing apathy from the locals as well as tourists, conservation efforts are on.
Mountain biking
Nagaland also serves as a wonderful and engrossing mountain biking destination in Northeast India. The roads are good and suitable for beginners. Besides the nature trails, you can also visit some of the primitive Naga villages like Sangtam and Angami and even the neighbouring state of Assam. Bike rentals are available in Kohima for a day trip and on a daily rental basis. The popular biking trail areas are Lugsad, Rain Forest Trail, and Bakahan.
You must book an organised bike tour in Nagaland but if you’re confident in doing it alone then it is advisable to have a biking route map on your travel app or carry a physical map of the biking route you are going to explore.
Bird watching
Bird watchers and nature lovers can indulge in a lively and delightful bird-watching tour in Khonoma hamlet. Jotted on a small hill, Khonoma is also credited as the first “Green Village in India.”
Conclusion
Nagaland is a tourist-friendly place in Northeast India. Nagaland offers unending exploration possibilities, from witnessing unique heritage sites, rich wildlife, and local festivals to trying delicious cuisines and buying beautiful handicrafts.
Nagaland Tour Packages
Nagaland and other tourist places in Northeast India
Amazing Tourist Places in Nagaland Perfect for First-Timers
Rediscovering myself in Nagaland