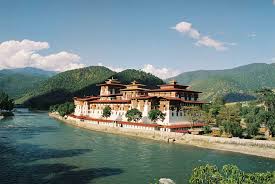 10 pictures from Bhutan that will take your breath away

The Land of the Thunder Dragon  or Bhutan as come to the attention of the globe for it’s unique concept of GNH (Gross National Happiness) index which is used to calculate the growth and development of the country as opposed to GNP (Gross National Product).

However, its happy citizens are not the only interesting things about this monarchy sprawled over the Asian Himalayas.

Bhutan has been adept at maintaining it’s culture and customs and enforcing strict laws to ensure that with the advent of modernization and globalization, all is not lost. Traditional Bhutanese architecture, the sprawling mountain landscapes, the Bhutanese countryside and girls and boys of all ages decked up in traditional attire on their way to school or offices are a sight to behold!

Here are 10 breathtaking pictures of Bhutan that will make you want to book your ticket, grab your bags and be there already!

The most famous and iconic image Bhutan has to offer -  the incredible Tiger’s Nest Monastery or Paro Taktsang, perched on the edge of a steep cliff.

The capital city of Thimphu sprawled over the Thimphu Valley

Traditional Bhutanese architecture displayed at a fortress in Trongsa, Bhutan